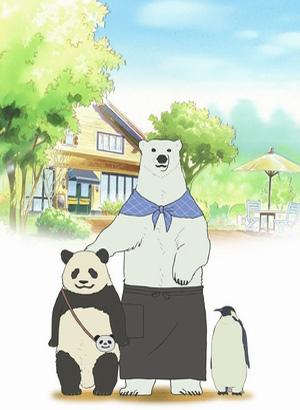 Panda, Polar Bear, and Penguin. Yes, those are their actual names.
Advertisement:

Shirokuma Cafe (Polar Bear Cafe) is a Slice of Life manga that received an anime adaptation premiering in the spring of 2012.

The show follows the daily exploits of a lazy, young panda named Panda. Constantly told by his mother to get a job, he one day stumbles into the titular cafe, run by the enigmatic Polar Bear (better known as Shirokuma in Japanese), a soft-spoken polar bear. Joining them are Polar Bear's friend, a sarcastic penguin named Penguin, various animals from the nearby zoo, and Polar Bear's sole employee, a human girl named Sasako.

The anime was simulcasted and can be watched, subbed, on Crunchyroll

Panda imagines a super good-looking version of himself.

Panda imagines a super good-looking version of himself.