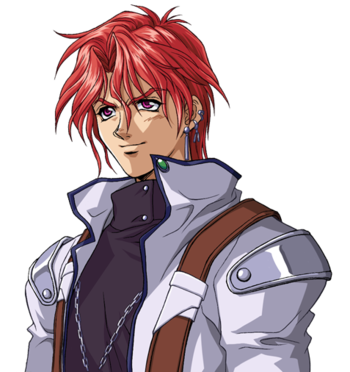 Voiced by: Nobutoshi Canna
"The tips of these scales...will turn you into a turkey!!"

The male protagonist of Advance, Axel Almer is The Dragon of the Shadow-Mirror's Big Bad Vindel Mauser and the lover of Mad Scientist Lemon Browning. When picked as The Hero, he suffers a bout of amnesia upon jumping into an Alternate Universe, where he begins to act like an all-around silly man with strange capabilities to pilot a Humongous Mecha. He also tries to be a Handsome Lech, but horribly and hilariously fails all the time. When faced with his true identity as a Shadow-Mirror operative, he ends up betraying them, becoming instrumental in destroying the organization.

In Super Robot Wars: Original Generation, the plot picks his villainous counterpart and is given an extra quirk: he becomes The Rival of Kyosuke Nanbu. This gets expanded due to a feud in the form of Beowulf, Kyosuke's Evil Twin in the Shadow-Mirror universe. Like his Advance story if he's not picked as the protagonist, Axel winds up dead following the defeat of the Shadow-Mirror at the end of Original Generation 2.

However, Axel shows up alive and well in Original Generation Gaiden: the "Cry Wolves" pull him and the Soulgain out of the White Star before it is assimilated by the "Einst". Although he comes close to death during the escape attempt, Einst Alfimi appears and merges with him moments before that can happen, ensuring his survival. Since the Shadow-Mirror are no more, Axel no longer bears any antagonism towards the "Steel Dragon Battle Group" or Kyosuke, and ends up aiding them several times throughout the game. Although under scrutiny, Axel proves his Heel–Face Turn by saving a Brainwashed and Crazy Lamia Loveless from the clutches of Duminuss, earning the trust and gratitude of his new allies.

Following Original Generation Gaiden, Axel continues to wander the universe, assisted by Alfimi. He wounds up in the Endless Frontier and receives a dose of Amnesiac Dissonance while trying to rescue her from mysterious creatures called "Lamalices". With his memory gone, he reverts into his "Ahoseru" personality and undergoes several misadventures. Sometime after dabbling in this dimension, Axel returns to the Original Generation universe at the onset of the Second Original Generation, with Earth under siege by the "Guests". Since his Soulgain is under maintenance aboard the Kurogane battleship, Axel opts to use the Vysaga until repairs are complete. Meanwhile, he begins training Touma Kanou, pilot of the RaiOh and tangles with Duvan Org in an attempt to rescue Alfimi, when he consumes the latter to gain more power. At the end of the story, Axel takes residence aboard the Kurogane, continuing to train Touma.

In The Moon Dwellers, Axel suspects Sanger Zonvolt was sent to the Endless Frontier when Lamalices reappear; furthermore, he discovers his sojourn into the Endless Frontier was no accident - it was caused by Debudabide, a member of the "Dark Brain Army". With Sanger's return alongside Haken Browning and Aschen Brodel, he, the Kurogane crew and the Steel Dragon Battle Group must deal with the lunar "Fury" and extraterrestrial "Gadisword".

He, along with the Soulgain, embody these tropes: 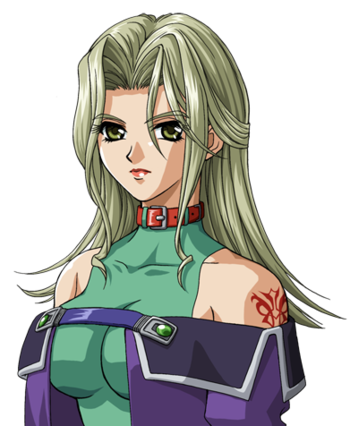 Voiced by: Kaori Shimizu
"I can't become human, but I know what being human is like."

Female protagonist of Advance, Lamia is an android, the seventeenth model designated "W17" in the latest creation of Lemon Browning and her "W-Numbers" series, with an exceptionally shapely body, since Lemon's trying to play the bit of "creating beings nearing perfect humans" (oh, and her outfit doesn't help). She has a no-nonsense personality, but deep down, since she hasn't spend a long time in the living world, she's akin to a clueless child. When sent into the Alternate Universe, the interdimensional jump damages Lamia's speech box, causing her to develop very broken grammar (woolsey'd into stuttering speech in the localization). As she spends time in the group she infiltrates, she gains some of her own consciousness and this leads her to betray the Shadow-Mirror, becoming a crucial element in defeating the whole faction. After realizing she killed her superiors, creator and ultimately fails her original mission, Lamia's Driven to Suicide, only to be stopped at the nick of the time. This heroic scenario is the one carried over into Original Generation; in addition, Lamia forms a close friendship with Excellen Browning and when her speech box gets repaired by Lemon, it only makes things worse as there are occasions where her voice turns into something like a little girl.

Lamia gets hammered with lots of unfortunate events in "2.5: Unified Wisdom", including getting caught by the "ODE System" in an exhibition gone awry before she has a chance to fight back, in danger of having her personality drained. Lamia refuses such a thing and disrupts the battle data from the ODE System, indirectly saving her friends, and gets bailed out by Kyosuke, only to be shot down by the hive mind of the system, implying she's Killed Off for Real. Although this becomes a source of a major Cliffhanger, in Original Generation Gaiden proper, Duminuss rebuilds and reprograms her to turn her against her allies. Shortly after, she's saved by Axel, who pulls a genuine Heel–Face Turn in light of this rescue.

Officially, she pilots the very feminine-looking, angelic super robot Angelg. In Advance, she can pilot the ninja-samurai-robot Vysaga, though Axel can use it too. It becomes exclusively for her in Original Generation continuity, until the Second Original Generation, where Axel can also use it. They embody these tropes:

In General
The antagonists of Advance, the Shadow-Mirror is an organization that wants to engulf the world in an endless war, with the reasoning that with war comes improvement for humanity and technological advancement. They tend to send spies to the world they are trying to invade and launch a surprise attack based on the information given. Led by Vindel Mauser with Axel as The Dragon, it is also the home of their lead scientist Lemon Browning, who proceeds to carry out the W-Numbers project, creating Artificial Humans as close as possible to a real human for infiltration and sabotage.

While they seem to be petty villains back in Original Generation 2, Continuity Reboot fundamentally changes them into a form of misaimed hero. Indeed, The Federation in their dimension are so corrupt, life seems like hell, and with people like Beowulf supporting the government, the Shadow-Mirror look like heroes. They're also responsible for the creation of some of the characters in the Endless Frontier (Haken Browning, Aschen Brodel and many other W-Numbers).

Tropes associated with the Shadow-Mirror include the following: The leader of the Shadow-Mirror and Big Bad of Advance, this warmonger ex-colonel of his world's Earth Federation Army believes war is the only way for humans to evolve and move forward. He has this mindset due to witnessing his world dwindling into corruption, complacency, decadence and weakness from an achieved, but redundant peace after a war with extra-terrestials. His plan comes to a halt when the government sends Beowulf to stop them, prompting him and his organization to jump to another world and lay low until the time comes to strike down the resident government, Take Over the World and fulfill his utopia.

While he prefers to be operating behind the shadows, when push comes to shove, he takes to battle with the Zweizergain, a souped up Soulgain-like variant. Vindel's top scientific researcher, with implications of being Axel's lover, Lemon Browning is the head of the W-Numbers project, creating Artificial Humans to be as close as possible to the real deal. Thus far, she's produced 18 of them, though the prototype, "W00", is instead a test-tube human, and it would seem that she's most proud with Lamia, her latest creation, whom Lemon deems as the closest one to a human being. Should the player make Axel the Advance protagonist, Lemon admits if it wasn't for the situation that ended up with her being his enemy, and the two of them had met at an earlier point in time, they could've developed a closer relationship.

In Original Generation, Lemon's backstory is heavily tweaked. She is the Shadow-Mirror counterpart of Excellen, but a unique take on "What if Excellen died during the shuttle crash?" and Evil Twin. The result is her parents recovering her body, resurrecting her through robotics and science, but because she wasn't a good enough Replacement Goldfish by her parents, she changes her name to Lemon. The W-Numbers are essentially her progeny: a way for her to understand and emulate her unique nature of something that isn't quite human.

Lemon pilots an Ash Saver in Advance, but uses a customized version of the same machine called "Weiss Saver" in Original Generation. Also known as "W16", Echidna Iisaki doesn't appear in Advance, but was loosely mentioned having supposedly assassinated Admiral Leon of the Balms, which in turned got the Balm Alliance assassinating Isamu Ryuuzaki, and should she fail, Lamia would've been the one to do the job (this only occurs in Lamia's story; in Axel's route, he's the one who orchestrates it).

In Original Generation, Echidna ascends to the position of the Advance "Rival Lamia" role, usually contacting Lamia and keeping her in check and in line with the infiltration. She seems dutifully robotic and doesn't portray much personality until the Federation's assault on the Inspector-occupied White Star where, of her own will, takes a fatal attack for Axel, and ends up destroyed. Depending on the continuity, Axel either gets disgusted a doll he hated saved his life or laments her death will bring despair and lower morale of the Shadow-Mirror.

Echidna pilots a Laz Angriff in the games, while in The Inspectors, she switches to a black-colored Angelg.