Epic Mickey features a cast of characters, mostly based on Disney properties.

Our hero, ladies and gentlemen.

Disney's own mascot, based on his early appearances as a mischievous mouse. His attempts to use Yen Sid's magical paintbrush accidentally led to him creating the game's main antagonist, the Shadow Blot, and causing the Thinner Disaster which ruined the Wasteland.

The first son of Disney.

Originally created by Walt Disney before Mickey Mouse, Oswald was the ruler of the Wasteland, but since the arrival of the Blot, he is now fighting against it as leader of La Résistance. 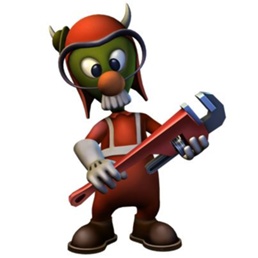 Mickey's first companion, Gus is one of the Gremlins fighting against the Shadow Blot, and providing commentary and exposition for Mickey. 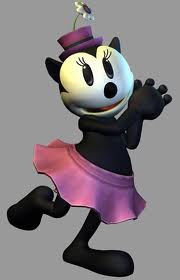 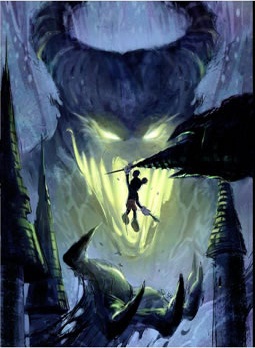 Originally the "Phantom Blot" from the Mickey Mouse Comic Universe, the Shadow Blot is the game's main antagonist, a creation of Paint and Thinner that threatens the Cartoon Wasteland. 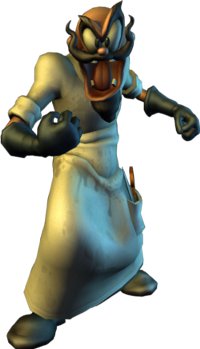 From the 1933 short where he kidnapped Mickey's dog Pluto, The Mad Doctor stands alongside the Shadow Blot as the main antagonist in the game. He is the Big Bad of the sequel all on his own, taking on a much more comedic role than in the original.

The smiling, golden-faced Clock Tower from the "It's A Small World" ride serves as the first boss. He'll try to flatten Mickey with his huge armored fists and arms.

The chief authority in Mean Street, Pete has several counterparts in other areas of Wasteland, including Small Pete near Gremlin Village, Petetronic in Tomorrowland, and Pete Pan in Pirates of the Wasteland; all of them know each other. He may become nicer (or not) depending on the player's actions.

The Gremlin who lives in Ostown. He's a pretty normal guy in the first game, but by the second he has become the very snarky caretaker of the Gag Factory. This series' The Napoleon poster boy.

Mickey's classic comrades appear as animatronic recreations made by the Mad Doctor so Oswald could have his own close friends. They're located in various hubs around Wasteland, who have been attacked and disassembled by the Mad Doctor's Beetleworx army.
The Bunny Children

The many, many infant children of Oswald and Ortensia that run around the Wasteland causing trouble.