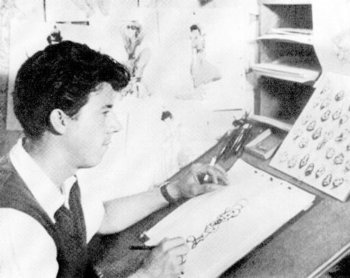 "He was such a help to other guys. Guys would come in his room and say, 'Fred, how would you do this?' Fred would say, 'Well, here!' — and he'd show them. He didn't lecture, he just did it."
—Larry Clemmons, veteran Disney storyman
Advertisement:

Robert Fred "Freddie" Moore (1911-1952) was an animator at the Walt Disney Studios who is largely responsible for the look and feel that Disney is most known for.

Fred Moore joined the Walt Disney studio in 1931 as an assistant and later became a full-fledged animator in 1933, his first major assignment being the Oscar-winning Silly Symphony short The Three Little Pigs During that time, Moore refined the design of Mickey Mouse to make him more flexible and expressive, including giving him a pear-shaped body (which debuted in Pluto's Judgement Day) and fixed white eyes with black pupils (which were made for the "Sorcerer's Apprentice" sequence from Fantasia).

When Walt Disney began working on the studio's first feature film, Snow White and the Seven Dwarfs, he was brought in to refine the designs of the dwarfs to make them more appealing and easier to animate. These designs were the basis of what would be called the "Golden Age" of Disney animation. His next assignment would be the lead animator for Lampwick in Pinocchio, who was essentially a self-caricature.

Around the studio staff, Fred was best known for drawing innocently nude women, dubbed "Freddie Moore girls", that many of the staff artists wanted a sketch of. Some of these girl designs wound up in some of Disney's films, including the alluring centaurettes in Fantasia, the teenage girls in Make Mine Music (where he singlehandedly animated the scene where a girl showers and dresses while her little sister follows her) and the mermaids from Peter Pan, which would sadly be the last Disney film to have him as an animator as he did not live to see this film released in 1953, due to his unexpected death in 1952.

Moore was fired from Disney in 1946 due to his increasingly heavy alcoholism, an issue allegedly hindering his output at the time. After several months of freelancing, his former colleague Dick Lundy hired him as an animator and character designer for Walter Lantz Productions, where he helped slick up the design for Woody Woodpecker within iconic shorts such as "Wet Blanket Policy" and "Wild and Woody!". After animating on a small number of shorts, the Lantz studio temporarily closed in 1948, sparking Moore's return to Disney, where he would remain for the rest of his career. This was, however, unfortunately destined to be short-lived.

Sadly, Moore died as a result of a car accident on November 23, 1952, after animating Mickey one last time in The Simple Things and Casey's daughters in Casey Bats Again. Ollie Johnston, one of Disney's Nine Old Men and an apprentice under Moore in the late 1930s, personally kept his pencil taped to his window as a memento. Moore posthumously received the Winsor McCay award in 1983 and was named a Disney Legend in 1995. He is also mentioned prominently in the book The Illusion of Life.