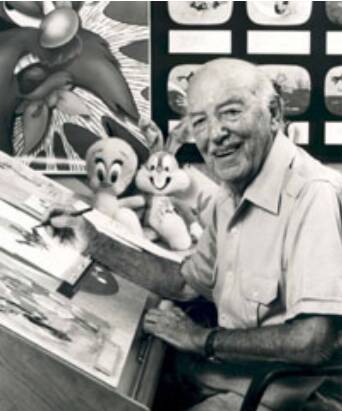 Isadore "Friz" Freleng (August 21, 1906 – May 26, 1995) was a prominent animator and director of the Looney Tunes and Merrie Melodies animated shorts during The Golden Age of Animation and The Dark Age of Animation. Friz got his start during the twilight years of The Silent Age of Animation, working for Walt Disney alongside Ub Iwerks and Harman and Ising on the Oswald the Lucky Rabbit comedy shorts. After Disney left, he stuck around with Hugh and Rudy at the Charles Mintz studio, even getting the chance to direct on one Mintz Oswald, "Fiery Fireman", before they were fired.

However, he would later leave the studio to go to the then new Leon Schlesinger cartoon studio alongside Harman and Ising when they requested his help in making their Bosko, the Talk-Ink Kid short subjects. He worked as an animator on the early Looney Tunes, with an early work of his being the opening scene of Bosko and Honey playing the piano and tap dancing in "Bosko In Person". Even after Harman and Ising left the studio in '33, Friz came back to Leon to help him touch up some rejected "Buddy" comedies. Friz would continue to be a prominent director in the 30's, cranking out many classic cartoons-including I Haven't Got a Hat, the debut of his character Porky Pig in 1935. However, in the late 30's, Friz became interested in MGM's big budget animation department and quit Leon's studio to work there...only to be put onto the mediocre "Captain and the Kids" cartoon series with little to no creative freedom like he had at Leon's studio. Friz despised working on the cartoons, and as soon as his contract expired, he fled the studio and went straight back to Termite Terrace, where he would work until its demise in the early 60's.

Friz is often (and unfairly) taken for granted because his sense of humor and visual style were more reserved than those of the other directors. Nevertheless, Friz is legendary among animation fans for his strong emphasis on literal, mechanical musical timing - while all of the staff at the studio were capable of this, nobody used it in quite the way Friz did. Having directed more cartoons than any other director at the studio, Freleng directed many, many worthy classics, such as the groundbreaking Roger Rabbit Effect short You Ought to Be in Pictures, The Wabbit Who Came to Supper, "Rhapsody in Rivets", The Three Little Bops, among others. He also directed the majority of the Sylvester and Tweety cartoons, including the acclaimed Birds Anonymous, which is considered his best cartoon.

After the original Warner Bros. animation studio shut down, Friz teamed up with its last chief executive, David DePatie, to form a new studio on the original lot named De Patie Freleng Enterprises. With this studio, they not only attempted to revive Warner Bros. cartoons but also created the smash hit Pink Panther theatrical and TV cartoons. (Freleng's first Pink Panther short, The Pink Phink, won an Oscar.) He also assumed creative duties from Chuck Jones on TV adaptations of Dr. Seuss books after Jones's studio closed down. Friz also directed animation for the bridging segments of The Bugs Bunny/Road Runner Show and even made a few anthology movies like The Looney Looney Looney Bugs Bunny Movie and 1001 Rabbit Tales.

Friz passed on in 1995; Chuck Jones dedicated his last cartoon short, made the following year, to his passing.

Some say he was the inspiration for the character of Yosemite Sam (both short, red-haired, mustachioed, and hot-tempered).

1933: All shorts are probably co-directed with Harman and Ising.

Tropes that apply to Freleng and his work: