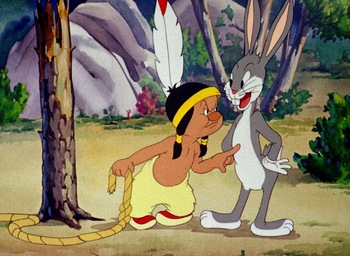 Bugs is relaxing deep in the forest somewhere, reading The Song Of Hiawatha by Henry Wadsworth Longfellow. He is startled when he gets to the part about Hiawatha hunting for rabbit. Sure enough, at that exact moment a Native American named Hiawatha comes sailing down the river in his canoe. Hiawatha looks like Elmer Fudd in Brownface but does not have Elmer's speech impediment, talking in a stereotypical "dumb guy" voice. He disembarks from his canoe and sets out to catch some rabbit. As usual, Bugs has to avoid winding up a hunter's dinner.

Although this cartoon is not one of the infamous Censored Eleven, it is a part of an informal list called "The Banned Bugs Bunny 12", which are twelve Bugs Bunny cartoons that rarely (if at all) air on American television due to Bugs' adversary being an outdated ethnic stereotype. These cartoons were meant to be shown on Cartoon Network's 2001 "June Bugs" marathon which advertised that every Bugs Bunny cartoon ever made would be shown, but were pulled at the last minute due to fear of backlash.