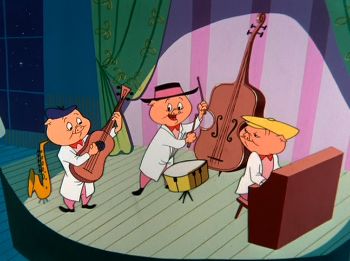 “The pigs were due for a big surprise…”
Advertisement:

"The Three Little Bops" is a musical 1957 Looney Tunes short directed by Friz Freleng with Shorty Rogers providing the music.

Another (very loose!) revision of the classic "The Three Little Pigs", with the pigs playing as a bebop jazz group and the wolf being a "square" trumpeter. In this version, the wolf is not interested in eating the pigs but rather becoming a member of their band. However, as his constant off-key playing is off-putting to both the pigs and the clientele, he gets kicked out of the first two clubs he plays and thus has a motive for blowing the houses down.

Famously, this is one of the first Looney Tunes shorts where somebody other than Mel Blanc got a solo screen credit for voices, in this case Stan Freberg.

"A-one and a-two and away they went!"