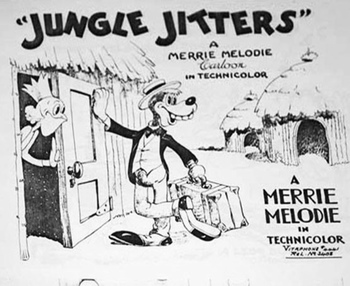 WARNING: The viewer might suffer from massive cringe.
Advertisement:

Jungle Jitters is a 1938 Merrie Melodies animated cartoon directed by Friz Freleng about a dopey, Goofy-esque salesman trying to sell his wares to an African tribe that has a white woman as their queen... and looking to marry the salesman.

The film is infamous for being one of the Censored Eleven (a collection of eleven cartoons that have never aired on American TV or were released on official home media due to extensive black stereotyping).