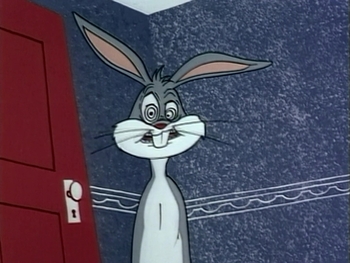 I am Elmer J. Fudd. Millionaire. I own a mansion and a yacht.
Advertisement:

In this cartoon, Elmer (referred to as "Elmer J. Fudd") is a wealthy oil tycoon. One day, his staff hosts a meeting to discuss a "crisis." The crisis being that Elmer has allegedly gone insane and now thinks he's a rabbit. His subordinates unanimously agree to place him in a mental hospital for treatment. Bugs walks past the window of Elmer's room, and Elmer bribes him with a carrot to open the window, so that he can escape. Bugs agrees, and Elmer escapes. Bugs, thinking Elmer just went out to get more carrots, settles into his hospital bed. Only for the psychiatrist Dr. Oro Myicin to come into the room. Dr. Myicin, naturally, mistakes Bugs for Elmer. And, when Bugs refuses to cooperate, the psychiatrist hypnotizes him into thinking he's "Elmer J. Fudd. Millionaire. Who owns a mansion and a yacht."

Bugs is later released from the hospital, still hypnotized into thinking he's Elmer. He's escorted by Elmer's limo driver to the woods for what would normally be Elmer's Wednesday morning hunting trip, only to encounter Elmer, who still thinks he's a rabbit. Thus begins a classic Bugs/Elmer chase, with the two characters' roles reversed. In the end, Bugs is taken to jail by an IRS agent (who thinks he's Elmer) for tax evasion. Elmer, meanwhile, reveals to the audience that he faked his bout of mental insanity all along as a way to leave somebody else (namely Bugs) holding the bag for his failure to pay company taxes.

The cartoon is a spoof of both 1950s psychoanalysis and the cliches and tropes found in Bugs Bunny cartoons. The cartoon was also the first to use the 1955-1964 "Merrily We Roll Along" theme.