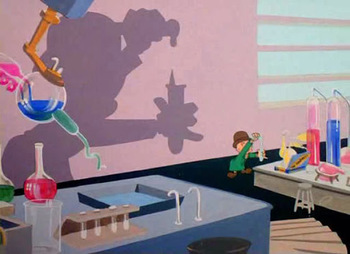 "Hare Remover" is a 1946 Merrie Melodies cartoon starring Bugs Bunny and Elmer Fudd. It is the second Bugs Bunny cartoon directed by Frank Tashlin (the other being "The Unruly Hare"), and his last cartoon for Warner Bros. to date.

Elmer Fudd is a Mad Scientist trying to create a formula to transform someone into a fiendish monster. Unfortunately, when he runs out of experimental animals, he is forced to capture Bugs Bunny. Unfortunately, his experiments are complicated by the rabbit's rascally behavior and the appearance of a grizzly bear.