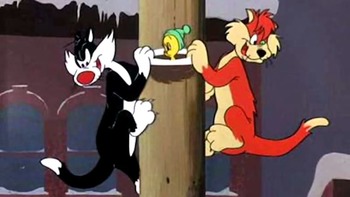 While shoveling snow out of his nest, Tweety is spotted by Sylvester and another cat, who both attempt to snatch him. The two cats then fight over the canary, both of them thwarting the other's attempts to eat the bird. However, in their feuding, they fail to take stock of their intended meal. And Tweety takes advantage of this to settle the matter.