Film / The Girl with the Pistol 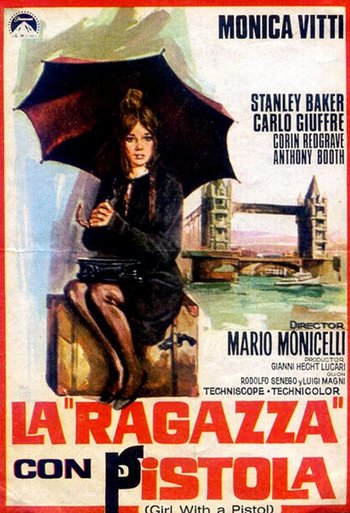 The Girl with the Pistol (La ragazza con la pistola) is a 1968 film from Italy directed by Mario Monicelli.

Come the morning, and Assunta wakes to find Vincenzo gone. She soon discovers that he has left the country, and in fact has taken a job at an Italian restaurant in Scotland. Unfortunately she is now a fallen woman who has dishonored her family. Neither Assunta nor her sisters can get married until either Vincenzo marries her or one of her brothers kills Vincenzo—but Assunta has no brothers. So she gets a gun and heads off to Scotland in pursuit of the man that jilted her. Various romantic and comedic hijinks ensue as Assunta crisscrosses the island of Great Britain, looking for Vincenzo, but possibly finding love elsewhere along the way.

The Girl with the Pistol provides examples of: