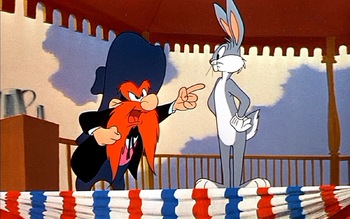 And the race is on!
Advertisement:

In the short, Bugs throws himself into the race for small-town mayor after hearing that candidate Yosemite Sam's campaign platform includes a promise to wipe out every last rabbit. An escalating dirty-trick campaign ensues (including a cigar swap), along with hilarity.