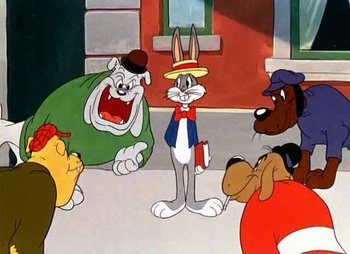 "A Hare Grows in Manhattan" is a 1947 Looney Tunes cartoon featuring Bugs Bunny.

The story opens with a gossip columnist in the Hollywood hills doing a profile of Bugs Bunny. After Bugs's "estate" is revealed to be fancy colonnades and a water fountain leading to... his rabbit hole, Bugs pops out of the ground and agrees to give an interview.

He recounts his childhood growing up on the Lower East Side of Manhattan. This, the bulk of the cartoon's story, involves Bugs street-brawling with a gang of bulldogs. The bulldogs, offended by Bugs's cheerful manner and fancy clothes, decide to beat him up, but Bugs turns the tables in his usual style.

The lead bulldog is Hector (a.k.a. Spike) the bulldog, in one of his first appearances; Hector would later be a frequent opponent of Sylvester the Cat.

"A Hare Grows in Manhattan" provides examples of: