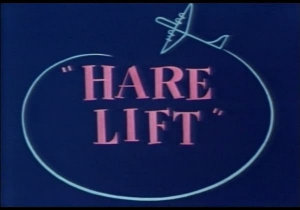 "Hare Lift" is a 1952 Looney Tunes cartoon directed by Friz Freleng featuring Bugs Bunny and Yosemite Sam. The short revolves around the "world's biggest" (and worst-guarded) airplane which Bugs wanders aboard after it is parked over his rabbit hole and left unattended. Sam is a fleeing bank robber who boards the plane as well, mistaking Bugs for the pilot and forcing him to take off. As always, Hilarity Ensues, but as seen below, the short's two best-remembered gags involve the use of the plane's two parachutes.