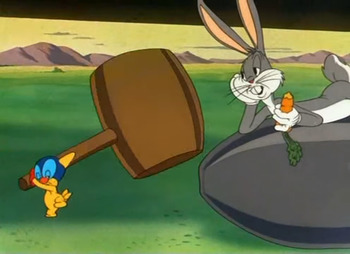 The cartoon starts with Bugs Bunny at an army airbase where he reads a book mentioning how gremlins love to sabotage airplanes. Bugs laughs off the notion of such funny little creatures existing, just as an actual gremlin walks by him and attempts to detonate the blockbuster bomb he's sitting on. After almost being tricked into setting it off himself, Bugs chases the Gremlin to a nearby airplane and the rest of their fight takes place in the sky where the little creature constantly keeps him on the ropes.

Bugs delivers two non sequiturs when the Gremlin clobbers him with a monkey wrench.

Bugs delivers two non sequiturs when the Gremlin clobbers him with a monkey wrench.