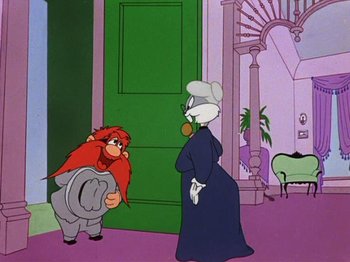 "Hare Trimmed" is a 1953 Merrie Melodies cartoon directed by Friz Freleng and featuring Bugs Bunny, Yosemite Sam and Granny, the latter in one of her few appearances outside of the Sylvester and Tweety shorts.

Sam learns that a local widow (Granny) has inherited $50 million and decides to marry her for her money, after which he intends to throw her out, raze the orphanage, and eliminate the police department. Unbeknownst to him, however, Bugs has overheard the ornery ruffian's evil intentions and vows to keep the widow safe, as only he can.