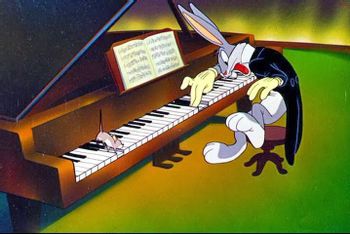 is a 1946 Bugs Bunny cartoon short, released in the Merrie Melodies series and directed by Friz Freleng.

The plot is simple. Bugs is a concert pianist performing Franz Liszt's "Hungarian Rhapsody No. 2". While playing, he begins to be bothered by a mouse that is living inside his piano. The mouse interrupts Bugs's recital repeatedly, sometimes jumping out from a hole to play a note that doesn't fit, sometimes playing an entirely different piece. Bugs tries to get rid of the mouse, at one point shoving a stick of dynamite into the piano, but the mouse always escapes. In the climax, Bugs flips the pages of his music only to find a tangled morass of notes all over the page. After a brief silent prayer, Bugs sits down to play—only to hear the mouse over on stage right, pounding out the frantic ending of the rhapsody on a toy piano that sounds real. Bugs plays the last three notes of the rhapsody, and the cartoon ends.

This cartoon is notable for two things: