Western Animation / Pigs in a Polka 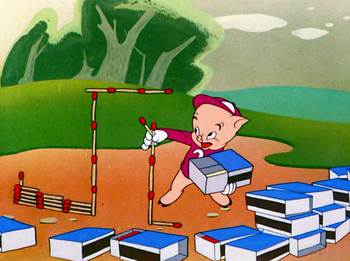 So many safety code violations.

Pigs in a Polka is a 1943 animated short (8 minutes) by Friz Freleng. It is one of the Looney Tunes.

It's Warner Brothers' comic response to Disney films such as "The Three Little Pigs" and Fantasia. It starts up with the standard Three Little Pigs setup, except pig #2 decides to get even more unsafe and build his house out of matchsticks. After the Big Bad Wolf destroys houses 1 and 2, he corners the three pigs in the more industrious pig #3's house of bricks. After the wolf fails to huff and puff and blow the house down, and knocking the door down also fails, it becomes a battle of wits as the wolf attempts to trick his way into the house. All of it set to a selection of Johannes Brahms' "Hungarian Dances".