Male protagonist of Judgment, Touya Shiun is a 17 year-old Japanese high school student and good friends with Kaname Chidori. Unfortunately, this normalcy does not last when a Humongous Mecha crashes into his school one day carrying three mysterious girls in the cockpit, chased by unknown individuals. Requesting his assistance, despite not knowing how to use the machine, Touya is forced to fight back against the girls' pursuers. In order to prevent being interrogated by the "Earth Alliance" military, Touya joins Kouji Kabuto and Sayaka Yumi aboard the Nadesico on its voyage to Mars.

As the events of Judgment unwinds, Touya discovers the "Fury", a group of Human Aliens who reside on the moon, are the ones attempting to destroy the world. The mecha he uses contains the "Cytron Control System", which allows him to master the machine in such short amount of time by fueling Touya the memories of its previous pilot on how to effectively use it.

In Super Robot Wars Original Generation: The Moon Dwellers, Touya's story remains largely identical to his Judgment counterpart, being classmates with Akimi and Akemi Akatsuki, but the Granteed descends near his home rather than crash into his high school. Katia Grignarl, Melua Melna Meia and his father Seldore Shiun are the ones aboard the machine, the latter heavily wounded, who urges his son to use the Granteed. Throughout The Moon Dwellers, Touya is determined to learn more about his origins and the Fury while safeguarding the Granteed from them.

Female protagonist of Judgment, Calvina Coulange was a genius Ace Pilot, but ends up retiring and being called to the "Ash'ari-Kreutzer" facility on the moon to mentor and tutor up-and-coming pilots. When the installation is destroyed by an unknown entity and seizes all the data within, Calvina winds up its Sole Survivor; not even her boyfriend Alvin Lunks survives. Heartbroken, Calvina changes from an enthusiastic lady into a grief-strickened woman, sometimes putting up a bout of Wangst. Rejoining the military, she's drafted to the battleship Nadesico, serving as an advisor to its squadron of "Aestivalis". During the trek through space, an unregistered machine carrying three girls in its cockpit are on the run. Begging her to use it and defend the Nadesico, Calvina hops into the unit and uses it, despite not knowing where the mecha comes from.

In Judgment, Calvina has access to the same mecha Touya can use; what she lacks in Touya's ability to use Fury machines effectively via the Cytron Control System, she makes up for it through her sheer skill as a former Ace Pilot.

In The Moon Dwellers, Calvina is an ex-Earth Federation pilot, having fought through the "Divine Crusaders War" both times, with her piloting skills and resourcefulness having earned her the epitaph "White Lynx". Following the war, she retires to become a test pilot at the Ash'ari Kreutzer facility, the lastest test machine being the Bellzelute, which doesn't operate on its own, until three young girls are brought to the facility. One of them, Festenia Muse, is placed as Calvina's co-pilot, despite the latter disliking the idea of having a child thrown into participating in operations with hers. However, during a flight test away from the facility, Ash'ari Kreutzer is attacked by the Fury with seemingly no survivors; the only clue is an unidentified Humongous Mecha. Calvina resolves to hunt down this machine in The Moon Dwellers and avenge her friends, no matter the cost.

A trio of mysterious girls who assist Touya or Calvina in their stories for Judgment, they were experimented upon by the Fury, but managed to escape, taking along a Fury-produced Humongous Mecha to flee from their pursuing captors. Katia is calm and composed, Festenia is feisty and foul-mouthed, while Melua is shy and timid, often prone to tears. The three assist the protagonist navigate their mecha in Judgment, serving as co-pilots.

Each girl grants a specific bonus to the protagonist and mecha, depending on whether she is the co-pilot: Katia increases weapon range and accuracy/evasion rates, Festenia boosts weapon damage and Critical Hit rates, while Melua offers defensive and movement bonuses. If one girl gets picked to accompany the pilot more often than the others, she becomes closer to the protagonist, eventually entering into a romantic relationship with Touya or becoming like a surrogate daughter to Calvina.

In The Moon Dwellers, Katia and Melua serve as Touya's initial co-pilots in the Granteed, while Festenia is working alongside Calvina at Ash'ari-Kreutzer as her co-pilot for the Bellzelute. However, once the initial route split ends, they are able to switch mecha just like Judgment.

The most level-headed and mature of the sub-pilot girls. 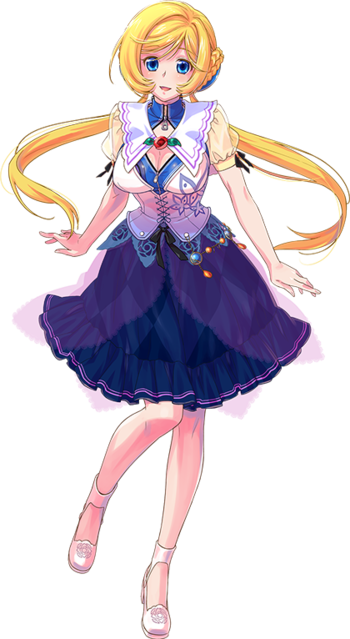 The most timid of the sub-pilot girls.

The main antagonists of Judgment, the Fury claim they are the ones who seeded life on Earth, but retreated from the world and resided on the moon, watching over their creations. The Fury also claim they were previously, eons ago, defeated by another space-faring force, fleeing from them to the far ends of the universe. The Knights are led by Gu-Landon Goetz and his subordinates Al-Van Lunks, Fu-Lu Mu-Lu, and Jua-Mu Dalby.

A Squire of the Fury hoping to become a Knight. He initially pilots a gold Vorlent, but later upgrades to a red Raftclans, at which point he specializes in utilizing the Orgon Claw. 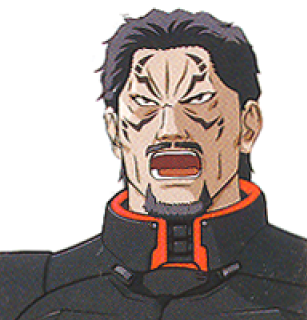 Gu-Landon as he appears in Judgment
Voiced by: Tesshō Genda

The Fury's Representative Knight. His personal machine is the Zui Gadin. 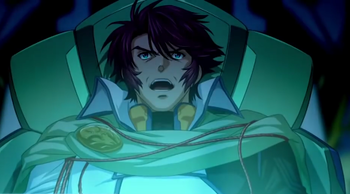 Touya's father. He has already passed by the time Judgment starts, but is present at the beginning of The Moon Dwellers as a staff member working at the Ash'ari-Kreutzer facility on the moon. 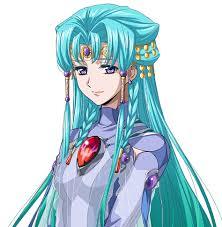 The princess and figurehead ruler of the Fury.