A member of the "Battle Force", Fighter Roar is a character created to serve as a fourth playable hero alongside Ultraman, Kamen Rider and Gundam for The Great Battle series. Roar makes his debut as a Non-Player Character in SD The Great Battle, but is fully playable in The Great Battle II. As the hero representative of Banpresto, the borders surrounding his eyes resembles the logo of the developer.

A Cyborg created by Dark Brain, Roar rebels against his Arch-Enemy in order to prevent other beings from suffering the same fate he endured. Roar originally did not bear the monniker "Fighter" on his name and is shrouded with a hood covering his entire body. Beginning from The Great Battle II and subsequent appearances, Roar dons red armor with visible blue hair. Although the faceplate covering his mouth are supposedly cybernetic implants, The Great Battle IV establishes it's a mouth cover. Despite having different character designs such as a referee uniform in Battle Dodgeball or when he becomes an evil warrior in Battle Commander, these are considered a set of different equipment worn by the same character. In Battle Racers, Roar's secondary color scheme consists of green hair and blue armor.

Roar reappears in Super Robot Wars: Original Generation pursuing Dark Brain in his Humongous Mecha "Compatible Kaiser", but unforeseen circumstances between traveling dimensions destroys his physical body, rendering him as a spirit. Known now as "Warrior Roar", he resides in the "Roar Armor", acting as the Spirit Advisor to his successor Kouta Azuma, who inherits his title of "Fighter Roar".

To avoid redundancy with Kouta in Original Generation, the following tropes are exclusive to Roar in The Great Battle series. 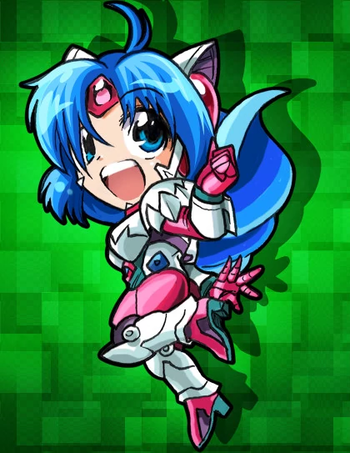 Fighter Roar's younger Cyborg sister, Emi debuts earlier in SD Hero Sōkessen as an engineer of a "Gachapon Machine". It isn't until Battle Commander is it established the two of them are siblings. Like Roar, Emi's character design differs depending on the game: in SD Hero Sōkessen, she wears a helmet covering her right eye, while in The Great Battle III, her visible hair is what covers her right eye. Both designs are used in Battle Racers.

Although Emi usually appears as an ally who aids the heroes throughout The Great Battle series, Battle Racers and Battle Pinball, in SD Hero Sōkessen she is taken captive and transforms into the Final Boss after Dark Brain is defeated before regaining her senses. Similarly, in Battle Dodgeball II, she is a member of the final rival team called the "God Factory", and in Battle Crusher, she becomes "Dark Emi" after being possessed by Dark Brain and challenges the player as the final opponent in the championship tournament.

While her powers are not as formidable as Roar's, Emi has several healing skills in various games, can wield the "Hindbreaker" weapon passed down by the "shadow people" in Battle Commander and has the ability to reduce an opponent's special move points in Battle Dodgeball II, among other abilities.

Emi does not physically appear in Original Generation, but the "Emi Armor" is seen. Like the Roar Armor, it houses Emi's abilities and powers, though there is no evidence to suggest a spirit like Warrior Roar exists. Instead, the armor is worn by Kouta's sister Shouko Azuma, who is forced to use it by Duminuss after she is taken captive by the Shura in Original Generation Gaiden. Upon wearing the Emi Armor, Shouko takes on the appearance of Dark Emi from Battle Dodgeball, who becomes hostile towards Kouta, until she breaks free from the effects of Mind Control. 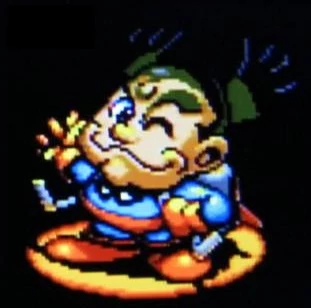 A short middle-aged superhero from SD Battle Ōzumō as the representative of Banpresto, Banprekid has a peculiar hairstyle and wears a Superman-like outfit with a rocket booster on his back. In subsequent games, he appears as a supporting character who assists the heroes as a referee or a shopkeeper. In Battle Commander, he appears with a completely different design as a robot equipped with a bow and arrows and a musket gun seen in advertisements.

Despite his heroic role in The Great Battle series, the Great Kaminarimon reappears as a teammate of the villainous Neo Dark Brain in Battle Dodgeball, where he has light blue hair, lighter skin, and protective gear on his chest and shoulders. Like Banprekid, he appears in an advertisement in Battle Commander carrying a pair of power turbines on his back with two horns instead of one growing out of his head.

In Original Generation, a Humongous Mecha modeled after the Great Kaminarimon appears as the "G-Thundergate" used by Dark Emi to combat Fighter Roar. Upon being freed from Mind Control, "Fighter Emi" (Shouko's Henshin Heroine Superpowered Alter Ego) uses the machine as a Mecha Expansion Pack for the Compatible Kaiser to form the "G Compatible Kaiser". 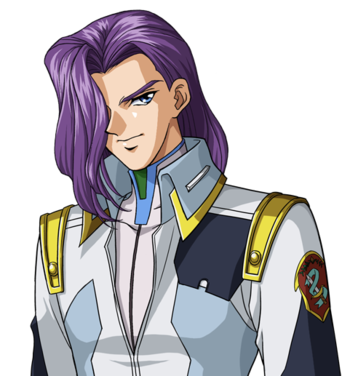 Voiced by: Hideyuki Tanaka
"This world is a test tube...and we are the experiment..."

Major Gilliam Yeager is 27-years old with long purple hair typically covering one side of his face. A former member of the "Aggressors", an elite Ace Pilot unit, he has a knack for appearing where trouble is brewing, though most of the time he tends to the intelligence division of the army: when he's not fighting, he helps the heroes by procuring information and supplies.

Gilliam is actually a Dimensional Traveler: unlike most characters in Banpresto's catalogue of video games, he is the same individual throughout all appearances. In his debut game Hero Senki: Project Olympus (Senki meaning "War Chronicles"), Gilliam is originally one of the heroes with a mysterious origin and a case of Amnesiac Dissonance, who pilots the Powered Armor "Gespenst". When he gets knocked on the head during a sort of Heroic Sacrifice, curing him of the amnesia, he remembers he's really the leader of the bad guys, "Apollon". The remaining heroes defeat him and his "XN Geist", a machine that warps dimensions, only to have him reveal he is actually a Well-Intentioned Extremist: using his powers of precognition, he foresaw a dark future for their world called "Elpis", and also realizes their world is artificial. Gilliam planned to use the XN Geist to save Elpis, but ends up doing more harm than help. In his last moments before everything comes crashing down, he sends the heroes to safety and teleports away to a random location, hoping he might someday return to Elpis.

From this point on, Gilliam becomes a permanent hero, traveling randomly throughout The Multiverse, while calling himself "Gilliam Yeager". His next appearance post-Hero Senki is in the "Classic Timeline" during the events of Super Robot Wars F/F Final. Some time post-F Final, Gilliam lands in the world of the Shadow-Mirror. By this point, his dimensional jumping "System XN" (XN Geist's core) is damaged enough he is forced to ally himself with the local "Tesla-Leicht Institute" to repair it, which also happens to give the Shadow-Mirror the ability to travel across dimensions. While staying in the Shadow-Mirror world, Gilliam takes on another pseudonym "Helios Olympus" (a combination of his base of operations called "Helios Base" when he was Apollon, and "Project Olympus"). During a test where he is to take System XN and run it, he accidentally sends him to the Original Generation universe, leaving System XN behind. Permanently relegated to this new dimension, Gilliam quickly integrates himself into Earth Federation and serves in the Earth Federation Army's intelligence division. Knowing the Shadow-Mirror will eventually arrive, he resumes his name Gilliam Yeager and awaits patiently for his former comrades to make their entrance.

Unknown to Gilliam, parts of System XN are integrated into Vindel Mauser's machine Zweizergain. Once the Shadow-Mirror are defeated in Original Generation 2, Gilliam takes the recovered System XN and destroys it; unfortunately, he's cut off his only hope of ever returning to Elpis.

After some time, however, he ends up falling into a completely unrelated dimensional phenomenon that lands him, without any information or equipment aside from his precognition and his custom Gespenst, into the world of Super Robot Wars 30, where he among several other potential Original Generations characters are pulled from there respective universes. However, unlike the other OG characters, who are pulled from their original appearances and not the OG series of games, Gilliam is the only one with knowledge of that universe, and all of the universes prior.

Gilliam prefers to pilot the Gespenst line of "Personal Troopers" and tends to emphasize speed over power. Due to the fact he is the pilot of the original Gespenst and always seems to be related to this machine appearing in multiple Super Robot Wars installments, it's theorized Gilliam is in fact the one behind the spread of Gespensts in The Multiverse. to see its One-Winged Angel form.

One of the first Original Generation created by Banpresto, Dark Brain made its debut as the Big Bad of SD Hero Sōkessen

. In this game, it is depicted as a brain implanted into a machine, a form it would use again in Great Battle Cyber. In the first The Great Battle, Dark Brain disguises itself in a cybernetic humanoid body covered in a mantle with a one-eyed device. In The Great Battle II, it becomes "Hyper Dark Brain", an upgraded form resembling his appearance in the earlier Famicom games, but without any armor, longer limbs and speaks in an exaggerated Kansai Regional Accent. In The Great Battle III, the original form of Dark Brain is shown, where it dresses itself up like a clown named the "Devil King".

Dark Brain reappears in Original Generation Gaiden as the Big Bad in a redesigned version of its form from The Great Battle. Sometime unspecified time after The Great Battle IV, a defeated Dark Brain leaves the Battle Force universe with Roar in pursuit. Wishing to re-materialize in another dimension, Dark Brain seeks the "Twelve Keys" that would allow him entrance into another world, thus sends out its underling it created, Duminuss, to do the task. Dark Brain somehow also got a hold of the Emi Armor and the G-Thundergate, granting both items to Duminuss for its use in order to manipulate Roar, now part of the Roar Armor belonging to Kouta. Despite the efforts of the Steel Dragon Battle Group, they do not prevent Duminuss from opening an inter-dimensional gate, allowing Dark Brain to enter. It takes everything Kouta as the new Fighter Roar and his Steel Dragon Battle Group allies to defeat Dark Brain, but not totally destroy it. 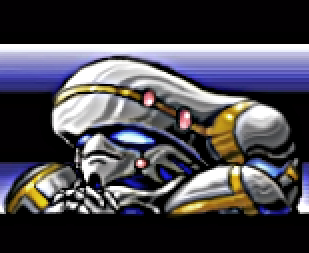 This caption has been visually improved for your convenience.

The Final Boss in The Great Battle II, Zan-El is an intergalactic being who has conquered many planets, and sets his next sights on the "SD Nation". He manages to divide the nation by destroying the "Environmental Management Device" while the Battle Force are fighting Dark Brain, allowing him to conquer the SD Nation without much effort. In The Great Battle III, Zan-El reappears as a magician who resurrects Dark Brain after he is defeated, though looks much smaller in size compared to the previous game. 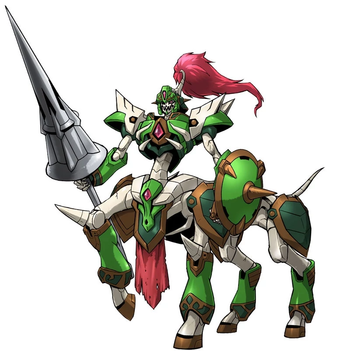 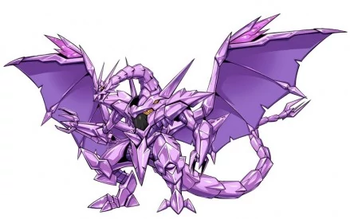 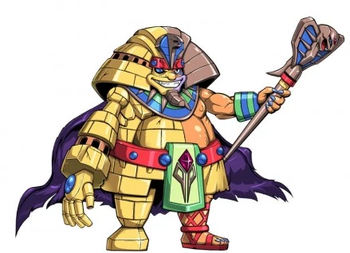