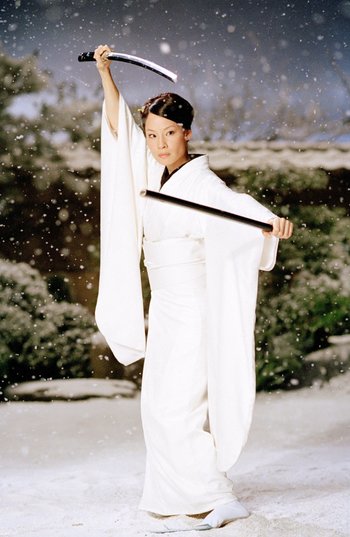 Demure meets Deadly.
Buffy: I never hit anybody before.
Merrick: Well, you did it perfectly.
Buffy: I didn’t even break a nail.
— Buffy the Vampire Slayer
Advertisement:

Basically, the Lady of War is an Action Girl who retains an air of grace and reserve not usually associated with violence. If she's not a Pretty Princess Powerhouse, she tends to be otherwise highly placed or at least look and act like it. If she's not gentle-mannered, she may be an Aloof Dark-Haired Girl or arrogant and generally prissy and might become subject to a Defrosting Ice Queen scenario. Often, she's simply The Stoic.

In RPGs, female roles tend to be limited to magic use, but sometimes women get to take on more physical roles in combat, and that leads us to a different Odd Couple pair: the Lady of War and the Cute Bruiser.

Character-design wise, she doesn't tend to be overly sexualized in the way that other types of Action Girl often are, or at least not to such an unsubtle degree. The Lady of War does have her own charm in a cool, collected, Nicole Kidman way. She's also very likely to have no Love Interest at all, or if she does, she is very unlikely to be paired with the protagonist — that's what White Mages are for — unless there is no White Mage. In any case, she almost certainly occupies a firm place in the hearts of at least a minority of the fandom. (see Amazon Chaser)

A Lady of War is almost always given an elegant weapon that emphasizes her femininity — often a bow, rapier, naginata, steel fan, or even an umbrella, all weapons that have a certain choreographic element in the way they're wielded. They also allow her to avoid getting her hands dirty and usually invoke Wouldn't Hit a Girl as a result. If guns are the norm, she's likely to prefer an easily-concealed revolver with deadly aim, as opposed to an automatic. If the story deals with martial arts, she'll use a "refined" fighting style like Tai Chi or Aikijutsu or will be given the gymnastic prowess to engage in some variant of She-Fu.

Expect her Impossibly Cool Clothes to still reflect her position. She might even wear a Battle Ballgown.

In terms of physical capabilities, she's usually some form of the Fragile Speedster (and/or Glass Cannon, if a ranged fighter), but it's not unheard of for her to be a Jack of All Stats or Mighty Glacier/Glacier Waif, especially if she wears armor. It is possible a degree of Sarashi will be necessary to deal with an inescapable physical reality which might impede free movement in combat.

If she were a preteen, she'd be a Little Miss Badass.

Contrast Short Tank or Bokukko Cute Bruisers. While the Lady of War is about grace and reserve, the tomboyish Cute Bruiser (or Girly Bruiser if they are more feminine) is more about unrestrained passion and power. The former also tends to be older than the latter. There is the possibility of having the Cute Bruiser grow up into a Lady of War, but it's not that common. See also Girly Bruiser.

Expect anyone with the title "Lady" in an Action-Adventure story to be this.

Compare Royals Who Actually Do Something, Rebellious Princess, Pretty Princess Powerhouse, Kicking Ass in All Her Finery and Officer and a Gentleman. Contrast Princess Classic, Prince Charming. Compare/Contrast Modest Royalty. If she's based on Joan of Arc, she's a Jeanne d'Archétype. Compare Silk Hiding Steel for a Proper Lady with a steel core in general, and Nothing Nice About Sugar and Spice for the more girly, loopier, and less successful versions.

A subtrope of Action Girl, though not all Action Girls qualify as Ladies of War if they lack the calm, dignified demeanor. Officer and a Gentleman is a related trope, but a Lady of War is not always a military officeholder. A Lady of War who uses magic rather than a melee weapon is a Lady of Black Magic, although a female Kung-Fu Wizard or Magic Knight can fit both. May be the female half of a Battle Couple. Like a male Cultured Warrior, some incarnations have a chance of being developed into a Warrior Poet.