This character sheet comprises of government official and military personnel belonging to the Earth Federation, who appear exclusively throughout the Super Robot Wars: Original Generation series. 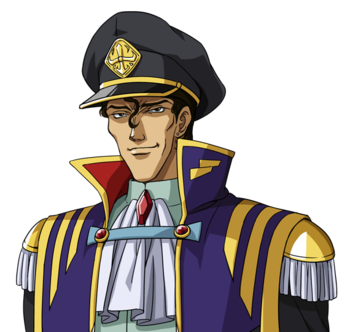 The Neidermeyer in dire need of a drill up his ass.
Voiced by: Ryo Wakabayashi (Orignal Generations), Kousuke Okano (The Inspectors onwards)
"...watch me, Tetsuya Onodera! This is my...This is the path Lee Linjun took!"

A former classmate of Tetsuya Onodera, Lee Linjun functions as the semi-Evil Counterpart of Tetsuya in every way imaginable. His mannerisms in combat involve "following the book", to a point where it becomes painstakingly ridiculous. Lee also holds no care for his subordinates, seeing them mere pawns that can be easily replaced. To that end, he holds a serious grudge against the participants of "Operation SRW" (which includes almost all of the "Steel Dragon Battle Group"; Tetsuya gets the brunt of his excuse). The reason? His wife Cynthia and his parents were killed during the Beijing attack by the "Aerogaters". The result: blame the heroes, NOT the invaders for his loss.

Lee makes his debut in Original Generation 2 as captain of the rebuilt Shirogane. During the war with the "Neo Divine Crusaders", Lee falls for a downright-obvious trap set by "Shadow-Mirror" forces, and the Shirogane is captured. Lee's approached by Vindel Mauser and offered a position among their ranks, which he readily accepts. As if he can't get any worse, Lee launches a surprise attack on the Hagane during the battle at the "North American Langley Base", though the combined Hagane and Hiryu Custom crews escape. When the "Inspectors" and Shadow-Mirror fall back to the "White Star", Lee faces Tetsuya, now Deputy Captain of the Kurogane. As a last-ditch effort, Lee attempts to ram the Kurogane with the Shirogane...except he forgets the Kurogane mounts A GIANT DRILL on its bow. The Shirogane is shredded to pieces.

However, Original Generations Retcons the event with the Shirogane retreating. As much as it's hard to believe Lee can survive a battleship-sized drill to the face, he returns in the Second Original Generation working for the "Gaia Sabers" as captain of their flagship Air Christmas, under the alias "Carly Neuman". His old persona is quickly discovered by the Steel Dragon Battle Group, however. 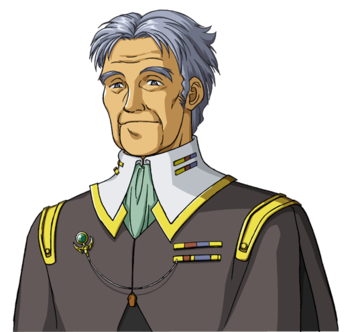 58-year old Brigadier-General of the Earth Federation Army and commander of the "Far East" branch of the military situated at the "Izu Base" in Japan, Randolph Laker is the one who approved of the plans for the "SRX Development Project" to build and create the Super Robot "SRX". 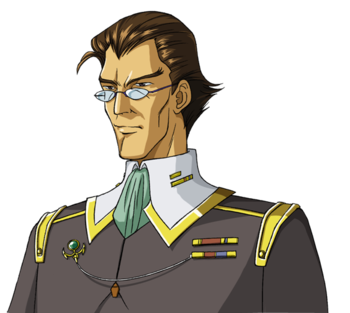 A Lieutenant-Colonel in the Earth Federation Army, 40-year Takanaka Sakae is a staff member at Izu Base and is its deputy commander, following the military's re-organzation post-L5 Campaign, occasionally seen alongside Laker throughout their appearance in Original Generation 2. 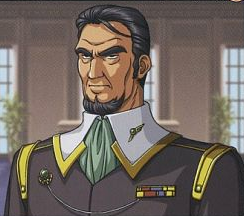 A Major-General from the Federation government's "Chief of Staff", 59-year old Norman Slay is the one who forms a planetary defense committee in order to perceive the possible threat of extraterrestrials attacking the Earth, and the one who oversees the construction of the "Space Noah-class" battleships (Hagane, Shirogane and Kurogane). Slay also approves of the formation of the "ATX Team", headed by Major Sanger Zonvolt. When the L5 Campaign is underway, General Slay takes command of Operation SRW from the Great Ark flagship, but is killed by Aerogater forces during a rush towards the White Star. Earth Federation Army commander of the "North American Langley Base", 55-year old Major-General Greg Pastral is in charge of finding the recruits behind Major Sanger's choices for the ATX Team. When the "Divine Crusaders War" (DC War) breaks out, Pastral is killed when he elects to stay at the base so the ATX Team and the Hiryu Custom can evacuate and evade the Divine Crusaders after taking Langley. A Lieutenant-Colonel at the Izu Base, 38-year old Hans Weber is one of its combat commanders. Heavily elistist in nature, Hans will do anything to advance his career before anyone else, even if it earns him the ire of multiple individuals whom he used to get ahead of. After the end of the DC War, with the appearance of the White Star, Hans flees to the aid of the Divine Crusaders so he be safely part of the long-term hibernation plans in the "Earth Cradle", a facility meant to house survivors in case of an end-of-the-world scenario. Unfortunately, he is Killed Off for Real while en-route to the Earth Cradle. The Deputy Chairman of the Security Council for the Federation government, 75-year old Karl Scheltesman is also Chairman of the "Extra-Over Technology (EOT) Council", responsible for allowing research into the technology found inside "Meteor-3" and use it to build and research machines and parts to be used to defend the Earth. A subordinate of Scheltesman, 52-year old Albert Grey was also one of the Federation representatives present at the Antarctic over talks of surrendering the planet to aliens. Although injured in the attack by Shu Shirakawa and the Granzon, Grey survives; unfortunately, he dies in the Divine Crusaders assault on Earth Federation headquarters at Geneva, Switzerland, killed by Tenzan Nakajima. 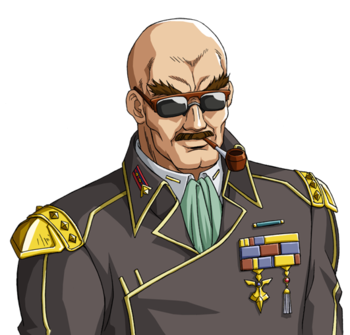 The succeeding North American Langley Base commander to General Pastral in Original Generation 2, Major-General Kenneth Garret has little expectations from his subordinates, particularly those of the ATX Team assigned to Langley. When the Inspectors capture Langley during their planetary invasion, Garret retreats to the Izu Base; when Brian Midcrid steps down as President of the Earth Federation, Garret is made commander of Izu in place of Laker all the way towards the Second Original Generation. 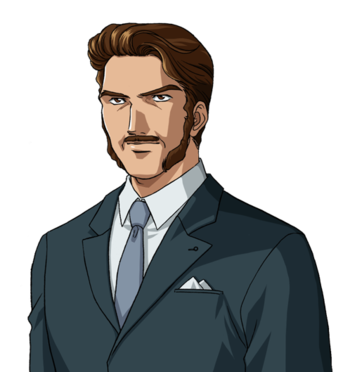 Part of the "Colonial Integration Office", Brian Midcrid is the politician behind "NID4", the support to autonomize the space colonies' independence, favoring its movement through non-violence. When the Divine Crusaders War occurs, he is extracted from the colonies by the crew of the Hiryu Custom and brought to Earth. Due to "Divine Crusaders Remnants" attacking Federation headquarters and killing many of the government higher-ups, Midcrid is appointed as the President of the Earth Federation by Original Generation 2. Six months after the "L5 Campaign" of pushing the Aerogaters away from the Earth, President Midcrid announces the "Tokyo Manifest", a new government decree which will better rearm and strengthen the Earth Federation Army for future incursions against extraterrestrial threats, dubbing this the "Shield of Aegis". Unfortunately, his term at office is cut short when he's forced to step down by his detractors for his policies. 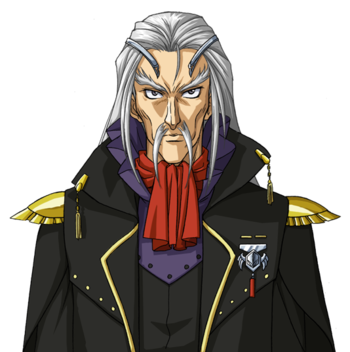 Chairman of the Federation government's security committee, Graien is nicknamed "the Wizard" for his appearance and excellent behind-the-scenes work by his peers. Whereas Midcrid is a supporter for his "Shield of Aegis" philosophy, Graien believes the world requires the "Sword of Harpe". He becomes the succeeding Earth Federation President in Original Generation 2 all the way towards the Second Original Generation. 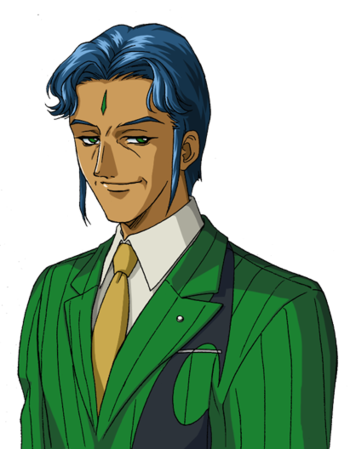 The former secretary to President Midcrid, Nibhal Mubhal becomes President Grusman's aide when he ascends to power. Known for his rich network of contacts, Nibhal's identity remains a mystery, as are his true intentions. 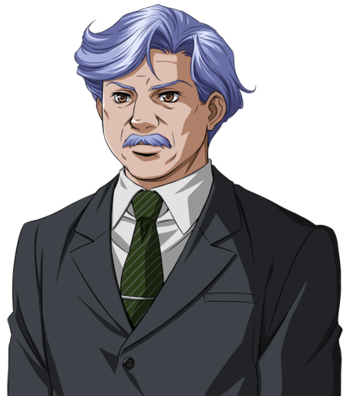 A senator in the Federation government, Taylor Centrum is the father to Aqua Centrum. Taylor does not approve of ex-President Midcrid stepping down, nor is he a supporter of President Grusman's policies, especially where his daughter is concerned, as she belongs to the Steel Dragon Battle Group, whom the Gaia Sabers accuse of breaking military protocol in the Second Original Generation. 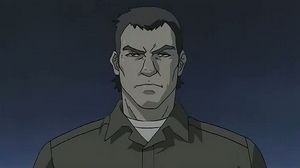 Holding the rank of Lieutenant, Kido Haruma appears in the Divine Wars Animated Adaptation. A commander in the Earth Federation Army's tank corps, he's an instrumental factor in the Character Development early on for Ryusei Date. 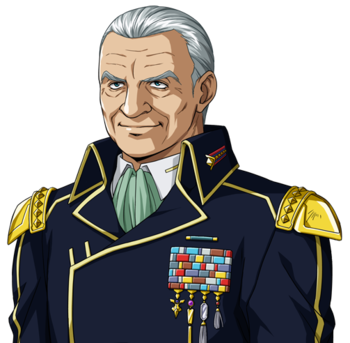 Appearing in the Second Original Generation, Gaspard Gillan is a Marshal of the Earth Federation Army. 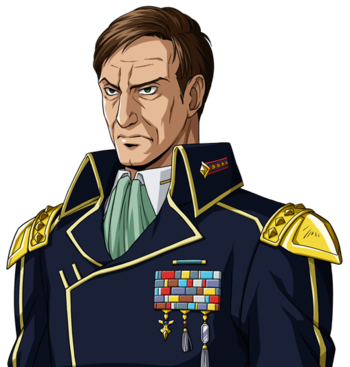 Chairman of the Joint Chief of Staff in the Federation government, General Daniel Howell is the adjutant to Gaspard. He is the one who devises the plans for "Operation Reconquista" and "Operation Icebreaker" in the Second Original Generation, the respective strategies to push the "Guests" away from the moon and breaking through the barrier erected over the Antarctic by the "Ruina". 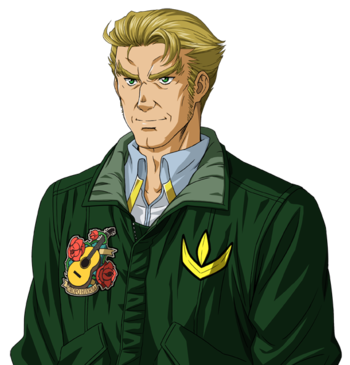 A Lieutenant-General within the Earth Federation Army, Jacob Moore is also an information minister; more specifically, he's the head of Federation intelligence, whom Gilliam Yeager answers to. With strong connections within the economic and political sides of the Earth Federation, Jacob serves as the communications liaison between the Steel Dragon Battle Group and the Joint Chief of Staff in the Second Original Generation when the former are on the run from the Gaia Sabers and the regular military. 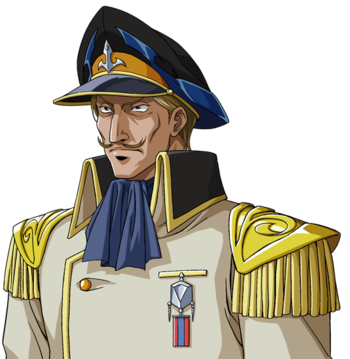 Commander of the Third Reconnaisance Fleet of the Earth Federation's space forces, Colonel Humphrey Innis is a veteran of the L5 Campaign and the one in charge of Operation Reconquista in the Second Original Generation. 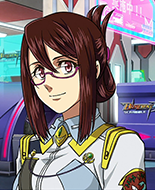 Making her debut in the Spin-Off Fighting Game Infinite Battle, Saika Shinagawa serves as the player's facilitator and guide to the game. She makes her Original Generation debut via The Moon Dwellers as Gilliam's aide within Federation intelligence. 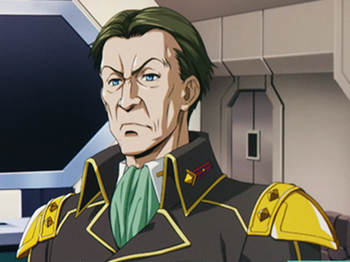 The Brigadier-General appointed by Federation Command to be the new commander of the Steel Dragon Battle Group in The Moon Dwellers.