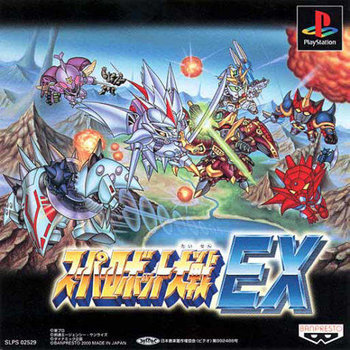 Super Robot Wars EX is not only the first Gaiden Game for Super Robot Wars, it's an odd one at that: looking like the love-child between Super Robot Wars 3 and Super Robot Wars 4 in terms of its visuals, the battle engine of EX is slightly less crippled than 3, but nowhere near what 4 offers. Fortunately, Banpresto decided to add in unit weapon upgrades, after the blatantly Nintendo Hard scenarios that plagued nearly early player in 3.

Unlike its predecessors, EX is the first Super Robot Wars installment to set itself in Another Dimension, more specifically, the subterranean home of Masaki Andoh, "La Gias". EX offers a new direction at letting players see where the interrupting Masaki comes from, after helping the heroes out in Super Robot Wars 2 and 3. Simultaneously, more original characters are introduced, namely the rest of the Masou Kishin ("Elemental Lords") cast that reappear in subsequent titles. EX features the "Multiple Scenario" system, where the plot is determined by the order the player selects the storyline. In this game, events are determined from the viewpoint of three characters: Masaki, Lune Zoldark and Shu Shirakawa.