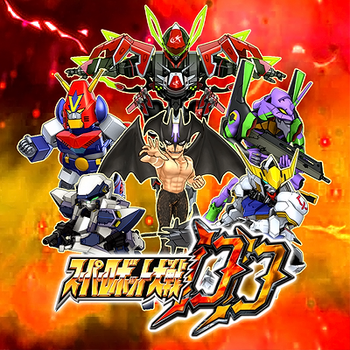 RAISE YOUR FLAG-- Oops, wrong show, even if the show is also in here.note So is that devil-looking fella a robot too? No?
Advertisement:

promotional videos have been released.

Series included in DD are (debuting series are rendered in bold):

Series included in post-launch after update:

The story revolve around the MART team led by Meguru Daimon with her mecha Grafdin and assisted with four fellow MART pilots, Sakimi Kanmaki, Yunna Dowson, Linaria Quo, Maiko Koutari, riding customized Merafdin units. During an investigation in Antarctica, they came across a humongous ship named Eltsard and along with it, a mysterious sentient giant/cyborg known as Didarion, and it also attracted similar beings named Angilon and Mabilon. During the crossfire, a portal opens up, separating Meguru with her other teammates, leaving her with just one, and stumbling upon one of the many parallel worlds present, where they came across Didarion's human form, an amnesiac boy called Dido. From there, Meguru must work with Dido to uncover his mysterious past, reunite with her friends and find out why Angilon and Mabilon are really hot on Didarion's trails.

Latter updates revealed that the transportation didn't affect just Meguru's team. Back in her home, another fellow Merafdin pilots, computer developer Eunice Airy and nurse Bennette Corryvekan, found themselves transported to other parallel worlds where they cooperated with various heroes to make due and find out what's going on, until their paths crosses with Dido and Meguru.

Unlike the preceding Super Robot Wars X-Ω, it plays closer to the main series' Turn-Based Strategy formula. However, unlike traditional installments, allied and enemy units' turn order is decided by a unit's speed, making DD the first title to eschew the allied and enemy phases during turns. As opposed to many other gacha games (including Super Robot Wars X-Ω itself), you spend gacha resources (referred as D-Crystal) to obtain a mecha's attacks instead of using them to obtain the characters, you will automatically get the characters as you proceed through the story. It's basically a hybrid of a traditional Super Robot Wars story, combined with gacha mechanics.

The mecha's attacks are categorized with:

Each of these attacks were categorized into three levels of rarities (R, SR, SSR) and possess extra perks when put as an equipment piece or set as a main finisher, which can only be used after a few turns and had only limited uses. Latter updates would allow a unit to equip up to 3 finishers, but only one can be considered the main finisher and grants benefits.