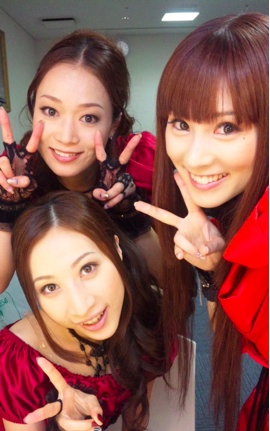 Power Trio Girl Group produced by Yuki Kajiura. Originally debuted in 2007 as a duo (Wakana and Keiko), Kalafina later expanded into a Four-Element Ensemble of sorts, at least until one element departed under mysterious circumstances. Have sung themes for The Garden of Sinners, Black Butler, Sound of the Sky, Puella Magi Madoka Magica, Fate/Zero, and a few other works. Their sound is very heavily associated with Nasuverse and Madoka works.

Unfortunately, 2018 was not a good year for the group. On February 2018, Yuki Kajiura left the group after her departure from her agency, Space Craft Produce. On April 2018, Keiko left the group but Wakana and Hikaru remained together to work on musical activities. Later on August 2018, Wakana decided to pursue on her solo career and on November 2018, Hikaru also left her agency. On March 13, 2019, Space Craft Produce shut down the fan club, officially disbanding the group.

Associated with the following tropes: