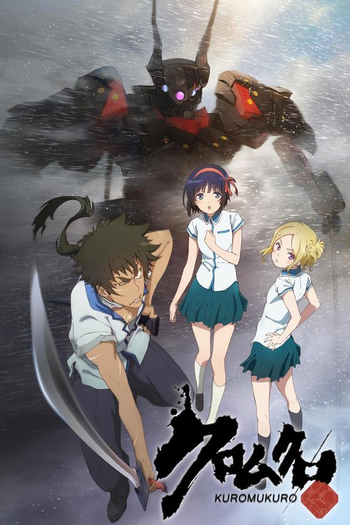 In the 60s, an amazing find was discovered during the construction of the Kurobe Dam

- a metallic titan, or for the lack of better words - an ancient robot. This find sends shock waves around the scientific community. Intellectuals from all over the world gathered to study the object, codenamed "The Giant", and soon the United Nations Kurobe Research Institute was established. By the year 2016, their efforts gave birth to Humongous Mecha known as GAUS, though they are still very much prototypes.

All of this doesn't really matter to Yukina Shirahane, even though her mother is the head of the Institute. Something of a underachiever, she could spend entire days just being amazed by the hills and rivers around Kurobe. One day, when she goes to the Institute to return her mom's cellphone, she stumbles on researchers fruitlessly trying to crack the mystery of a huge cube. This is another artifact found around Kurobe Dam just recently, and most likely of the same origin as the Giant. Soon after, several meteorites fall towards Earth, one of them crashing near the dam - or should we say, landing, as the meteors turn out to be giant robots accompanied by small armies of Mini-Mecha. They immediately start to attack, proving to be a real threat thanks to invisible barriers that render conventional weaponry moot. In the ensuing chaos, Yukina notices a red panel light up on the cube. After instinctively pressing it, the cube opens, releasing a river of green goo and a naked man.

This man, Ouma Kennnosuke Tokisada, is a samurai who fought the invaders, referring to them as Oni or "demons", during the feudal era. He kidnaps Yukina, mistaking her for Yukihime or the "Princess" he was tasked with guarding in his times. After coming into conflict with the personnel around the Institute, the cube reveals itself to be the cockpit of the Giant, and Kennosuke as it's master. The samurai, with an unwilling Yukina in tow, descend into the bottom of the facility where the object is hidden. The cube attaches itself to the Giant, revealing its true colors as Kennosuke's personal black Artifact - his Kuromukuro.

Kuromukuro (クロムクロ, lit. Black Artifact) is a original mecha anime series produced by P. A. Works, to celebrate the studio's 15th anniversary. It was directed by Tensai Okamura (Darker Than Black, Project Blue Earth SOS), written by Ryou Higaki (Another), character designs by Yuriko Ishii (Nagi-Asu: A Lull in the Sea) and music by Hiroaki Tsutsumi (Monster Musume). It premiered in April 2016. The series was simulcast on Netflix in Japan, with a worldwide release of its first season (eps 1-13) on July 4, 2016 and its second season (eps 14-26) following on October 10, 2016.