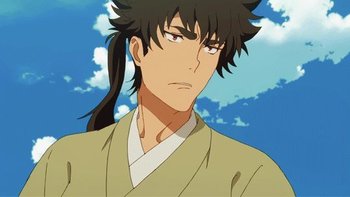 Young samurai from the Washiba clan that existed around Kurobe during Sengoku Jidai. When attacked by the aliens, somehow received a titular Kuromukuro from his liege, princess Yukihime, and fought them with it until defeated and then got frozen till the current time, when the aliens appeared again. 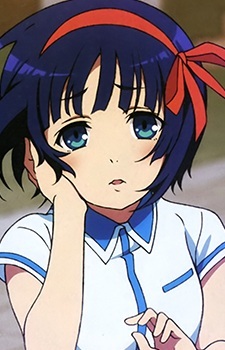 An Ordinary High-School Student in the Tateyama International School and the daughter of the institute Director. Somewhat airheaded and Book Dumb, she's apparently more than she thinks herself. 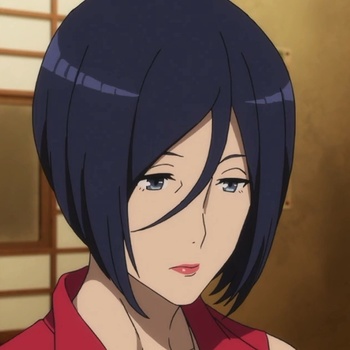 The Director of the Institute and Yukina's mother, she's a competent (if sometimes overly emotional) administrator, but loathes the fact that she has to sacrifice the time with her daughters to her job. 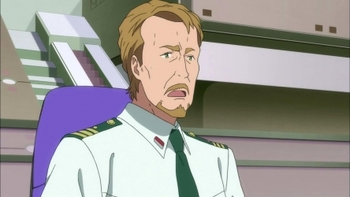 Head of the UN Forces contingent of the Institute, an old-school British officer, who is serious about his job and eager to do the right thing. 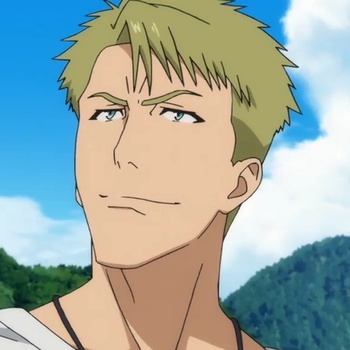 GAUS team commander, and a pilot of GAUS 1, a loud and obnoxious American who is nevertheless a good guy at heart, not to mention a fine soldier. 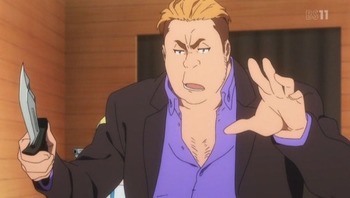 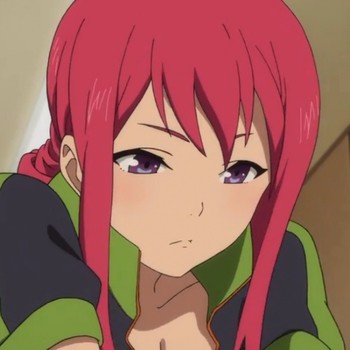 GAUS 1 navigator, a quiet and secretive Chinese girl that few know anything about. 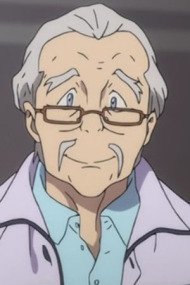 The Institute's Chief Engineer and the head of the excavation works. 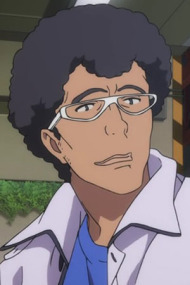 An electronics expert tasked with studying the Kuromukuro and often thus involved in shenanigans about its pilot. 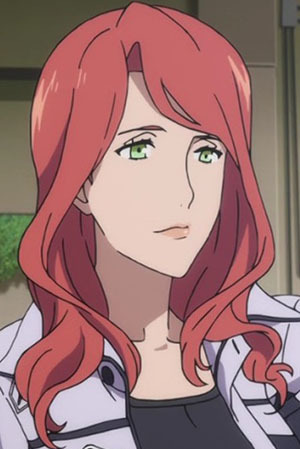 A materials specialist studying the stuff Kuromukuro made of and applications thereof, thus frequently paired with Casiraghi. 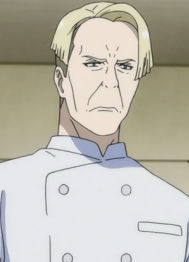 Chief biologist of the Institute, a stereotypical "mad German scientist", very competent in his field yet strangely obsessed with his subjects. 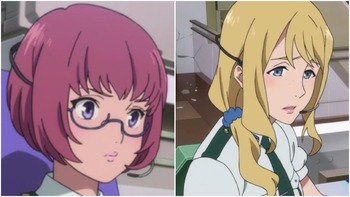 Two Bridge Bunnies in the situational room of the Institute, who report to Major Graham.

Yukina's best friend at school, she's a cheerful and active girl who's an avid cosplayer and often drags her friends to various events and setting.

An exchange student from France, she's a child prodigy and already even a pilot of GAUS 2. Though Yukina's classmate, she initially looks down at her, but later starts to warm somewhat.

Yukina's classmate with a reputation of somewhat of a delinquent and a pretty poorly hidden crush on her, he sees himself as a cool and important knight of the class and a rival to Kennosuke, but is actually pretty ordinary.

Akagi's friend who constantly streams around everything he sees, carrying a camera on him all the time. While he may think of himself as of an Intrepid Reporter, he's actually closer to Paparazzi, and, indeed, has brought on his and his friends' asses way more adventures than they'd care, but he remains undaunted.

Akagi and Kaya's somewhat more distant friend, Carlos is a resident Butt-Monkey of the class, being alternatively dragged about, abused, and ignored, which is almost always gets Played for Laughs.

Yukina's homeroom teacher and school's official counselor. She's only 23, and being barely older than her students, not to mention shy and impressionable, she always gets manipulated and dragged into their shenanigans.

The leader of the current Efidolg force around the Earth, the Gezon-Reco Frontier Reform Squad, he's a cautious and indecisive officer who tends to bide his time rather than act aggressively. Is implied to hold some important secrets about the previous invasion attempt.

The first major opponent, whom Kennosuke and Yukina had to fight twice in Toyama's downtown and at Toyama International Airport. After being finally defeated thanks to the GAUS' help, he tried Taking You with Me, destroying half of the airport and nearly capping Akagi and Kaya (who dragged in to watch) by the blast. Piloted the "Yellow Crab" mecha.

Another knight who purposedly allowed himself to be defeated to sneak into the Institute to search for the McGuffin Efidolg are looking for. Failed a Spot Check due to being an arrogant Jerkass and got killed by Kennosuke for his troubles. Piloted the "Long Arm" mech that remained in the Institute's possession after his death.

We don't know much about him, except that he's apparently successfully retrieved the hinge stones from both the US and Russia, because they lacked anything to stop him.

The hotshot pilot operating the apparently sole aerial unit of the Gezon Reco, the "Blue Bird". Fought inconclusively with Kennosuke and Yukina aided by The Demon, and successfully retrieved Mirasa after the infiltration mission where she stabbed Muetta and tried to leave her for dead.

An ambitious if a bit incompetent knight in a bitter rivalry with Muetta, which she usually tries to hide. After several unsuccessful missions, and being repeatedly bailed out by Muetta, she stabs her as soon as she has something nice to report, and leaves her for dead on Earth. Unfortunately to her, Muetta survives, thanks to Dr. Hausen and Kennosuke. Piloted the "Spider" geoframe.

A knight inexplicably identical to both Yukihime and Yukina (with whom she at least differs in a hairstyle) down to the genetic level. It's actually unknown whether she is Yukihime, but at least Kennosuke thinks that she is. Her unit is designated "Medusa".

The titular mech piloted by Kennosuke and Yukina.

Drone mecha used by the Efidolg, named for their lack of a head.

A hulking mysterious man in an Efidolg armor and demonic mask that often helps Yukina and Kennosuke. He keeps himself shrouded in secrecy and only reveals that he's an enemy of Efidolg, but Kennosuke remembers him as a commander of the invasion force from 450 years ago. He also somehow wears Yukina's dad's watch and his hideout was shown to be full of other references to Dr. Shirahane, raising everyone's suspicions.Turns out that he was a resistance fighter who came to Earth to try and stop an Efidolg invasion, and it's possible that the commander Kennosuke remembers was an another member of his race, as Efidolg is known to use the clones of conquered species to boost their ranks.

Hiromi's husband and Yukina and Koharu's Disappeared Dad, he was a historian studying the local Washiba clan and the circumstances of its eventual disappearance, and was laughed out of the scientific community for his ideas about the "demons" of the local legends actually being aliens. He then vowed to contact them and disappeared trying to do so. He managed to contact and befriend Zeringer, but died in an accident while trying to return to civilisation.

Yukina's younger sister, a cheerful and somewhat mischievous kid, she's a huge fan of historic dramas that often raise Kennosuke's interest only for him to slam them down as unrealistic five minutes later.

Hiromi's older brother, he's a Buddhist priest in charge of a temple in the outskirts of Tateyama, where he basically raises his nieces while his sister is off at work.

Kennosuke's original liege (and implied crush), a heir to the Washiba clan which he served, who, according to his (admittedly hazy) memories, stole the Kuromukuro from Efidolg attacking forces and handed it down to Kennosuke to fight the invaders. She then fought with him as his navigator until their eventual defeat by The Demon and Kuromukuro's sealing away. To everyone's (and especially Kennosuke's) confusion, she's absolutely identical to both Yukina and an Efidolg knight Muetta.