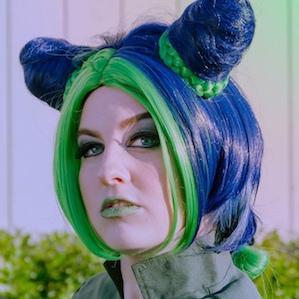 "Who said anything about Rin? I STABBED A GIRL IN THE YARD!"
— Kira Buckland as Gou in 50% OFF Episode 4

Kira Buckland (born July 16, 1987) is an American voice actor born in Anchorage, Alaska. She originally started voice acting in many Newgrounds productions and indie games, sometimes under the aliases of "Kagome Higurashi" and "Rina-Chan". She now works professionally in Los Angeles and is best known for her voice role as 2B in NieR: Automata.

In 2021, she came out as non-binary, and stated that she uses she/they pronouns.

Kira Buckland and her acting work provide examples of: