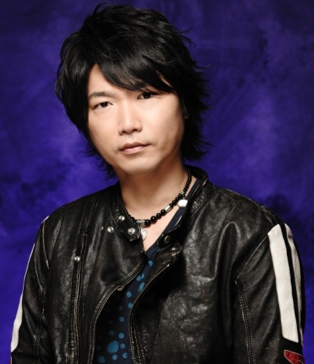 Listen Tetsuya, don't forget...Believe in you, who believes in yourself!
Advertisement:

Katsuyuki Konishi (born April 21, 1973) is one hell of a seiyuu. Unlike many seiyuu who get typecast as stock characters, he has pulled off stoic, reserved adult men, Bishōnen, laid-back male roles, jokesters, and one epic Boisterous Large Ham. On a whim. Sometimes all at once! While his fanbase started out small, Tengen Toppa Gurren Lagann vaulted him to 'instant legend' status as Kamina. However, he does have quite a few roles where he is either a big brother or big brother figure to one of the younger characters. Hell, he has even voiced the freaking United States of America.

His voice talents extend beyond humans as well - he has voiced several Pokémon, from Snorlax to Blaziken to Rayquaza. However, as of Best Wishes he has not had any new roles, so it has been assumed that he left the series.

His American counterparts are Patrick Seitz and Eric Vale, though Keith Silverstein can also qualify due to sharing a few roles with him.

None shall threaten these roles' everlasting apex!