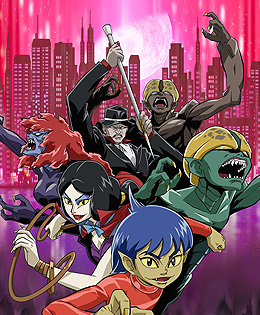 No one truly knows when the darkness came into the world. In that vast black, a single cell divided itself into three separate entities. These three creatures are not human, but each one of them possesses a strong sense of justice deep within their soul. And though they are monsters, hideous monsters, they believe that by doing good deeds, they will one day become human.
Advertisement:

A remake of the 1968 series Yōkai Ningen Bem, Humanoid Monster Bem is the story of three monsters trying to right the wrongs of other monsters. Along the way they hope to gain the approval of humans who fear and despise them, and to one day become humans themselves.They are:

Another remake simply titled BEM, was produced by Production I.G with LandQ Studios in 2019, with a movie followup, BECOME HUMAN, in 2020.