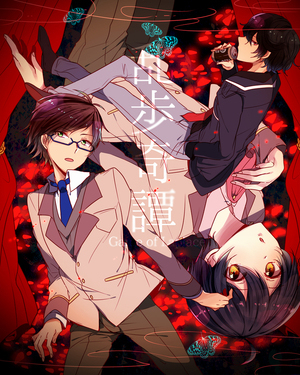 "This world we live in is a dream. The dream we have at night is, in fact, the true world."
— Ranpo Edogawa
Advertisement:

Ranpo Kitan: Game of Laplace (Mysterious Stories of Ranpo: Game of Laplace) is a Summer 2015 Anime by Lerche based on Ranpo Edogawa's works to commemorate the 50th anniversary of the author's passing. Its official website is here

Kobayashi wakes up in his classroom to find a bloodstained saw in his hand, his teacher made into a gruesome chair and blood all over the classroom. The police consider him guilty until the detective Akechi arrives. However, Kobayashi's more than willing to solve the crime for himself.

...Thus begins a series of murders and other crimes.

It's showing on Funimation