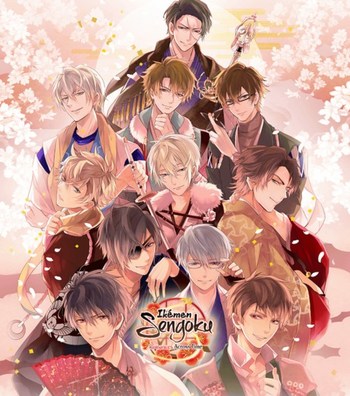 The men of Ikémen Sengokunames From top to bottom: Kennyo; Mitsuhide, Hideyoshi, and Sasuke; Ieyasu, Kenshin, and Shingen; Masamune and Mitsunari; Nobunaga and Yukimura. Not pictured: Ranmaru Mori, Yoshimoto Imagawa, and Motonari Mouri.
Sasuke: Don't get deeply involved with the people of this time.
Main Character: Deeply involved? Sasuke, I'm going to be in close contact with them for three months.
Sasuke: That is to say, don't fall in love. It might cloud your desire to return to the future.
Main Character: Haha, love? There's no worry of that happening. Have you talked to any of these people?
Advertisement:

Ikémen Sengoku: Romances Across Time is an otome Visual Novel by Cybird that started life as a romance mobile app and became popular enough to get an anime adaptation and a Japanese PS Vita port

Its protagonist (who you get to name) is a plucky modern-day Japanese woman who recently got her dream job as a fashion designer but has the colossal misfortune to be transported back in time to the late Sengoku Period before she can begin her job. On her first day in the past, she ends up saving the life of Nobunaga Oda, the famous "Devil King" warlord who sought to unite all of Japan, and learns from Sasuke Sarutobi — an astrophysicist who got transported back in time with her too — that not only did she unwittingly change history by preventing Nobunaga's historical death but she has to survive three months in a war-ridden period before she can return home.

And not only has Nobunaga become determined to keep her by his side as a "good luck charm" after her life-saving feat, but there are many other good-looking warlords and warriors she keeps running into who may form deeper-than-expected connections with her that may just interfere with her determination to return to her time.

The Ikémen Sengoku English mobile app was released in June 2017 and currently has ten available routes with more to come:

The game can be downloaded on both Android

Tropes pertaining specifically to the game's characters can be found on the Characters page.

Tropes in the mobile game: