open/close all folders
The Main Character

(Are these guys warlords or a bunch of teenagers in a locker room?!)

An ordinary Japanese woman who started her day planning to begin her new job as a fashion designer, only to be whisked away to the far past by a wormhole, change history by saving Nobunaga Oda's life, and become the chatelaine of a castle full of handsome but troublesome warlords before the end of that same day. She is determined, however, to make the most of her time in the Sengoku period before she returns home and gradually learns that the period — and the warlords she finds herself stuck with — might not be as bad as she initially thought.

Tropes common to the warlords living in Azuchi Castle 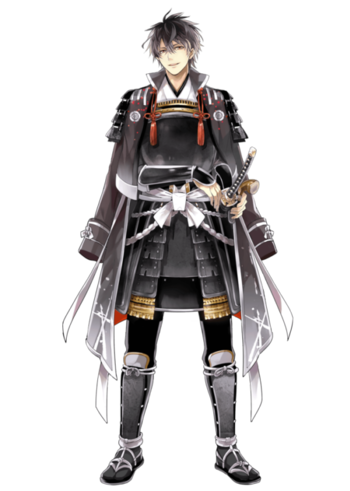 "That would disappoint me. You are the first woman to refuse me or snap at me. I want you."
Voiced by: Tomokazu Sugita

The most powerful warlord in Sengoku Japan who plans to unite all of Japan and has created an impressive number of sworn allies and an equally impressive number of sworn enemies along the way. Aloof and cold on the surface, he nonetheless takes a liking to the main character after she saves his life from an assassination attempt at Honno-ji, declaring her to be his "good luck charm" and giving her a position as chatelaine at Azuchi Castle to keep her close to him. 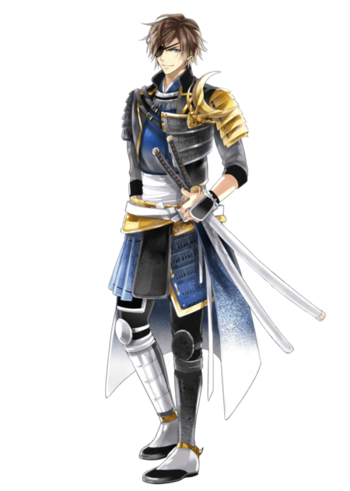 "Life is there for you to enjoy it. You can do that however you like, just make sure you're doing that for you, not for anyone else. If you try to live anyone else's way, you'll end up with regrets."
Voiced by: Kazuki Kato

An adventurous and free-spirited military commander allied with Nobunaga who's known as the "One-Eyed Dragon". He's quite the playful flirt who believes in living life to the fullest, but also has a more serious and dangerous side as a fettered leader willing to take lives on the battlefield. 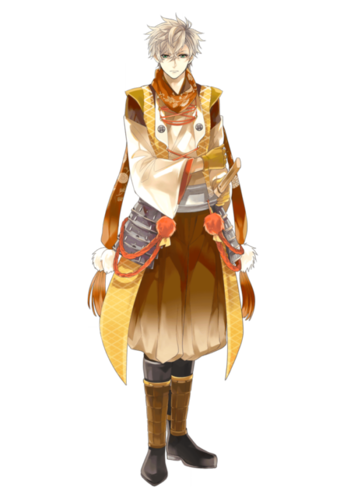 "Then I suggest you stop fighting it and let yourself be used. It's easier that way. Trust me."
Voiced by: Toshiki Masuda

A cynical, sharp-tongued warlord with no patience for people he perceives as weak, which includes the main character at first. Underneath that grouchy exterior, however, is a person who genuinely cares for the other Oda-allied warlords and grows to care for the main character too, even if his contrarian self would rather have his teeth pulled than admit it. 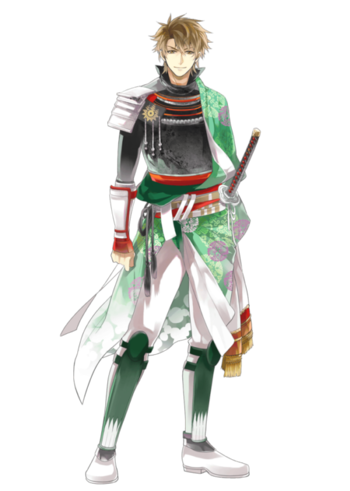 "I met this very special girl, you see. Her name is [main character's name]. We had some trouble in the past, so I wanted to give her a gift to show how much I appreciate her."
Voiced by: Kosuke Toriumi

Nobunaga's vassal and right-hand man who has an intense devotion to his lord and an equally intense devotion to acting as everyone's worried big brother. He starts out suspicious of the main character but soon mellows into a caring brother-like figure to her. 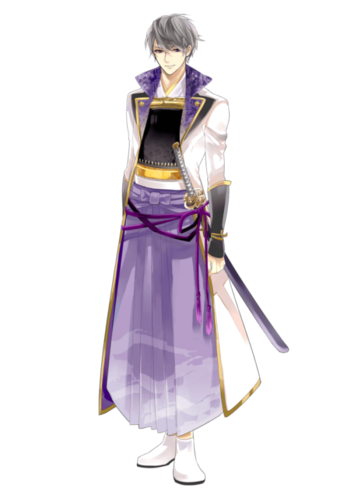 "I believe that knowledge is the greatest weapon in this world. It is, after all, the only weapon that can both harm and heal. I study tactics so that I can fight while saving as many lives as possible."
Voiced by: Yoshitaka Yamaya

Hideyoshi's vassal who serves as the tactician of the Oda forces. He's a highly intelligent and kind-hearted man who nonetheless is prone to clumsiness and cluelessness about matters that aren't related to books or military tactics. 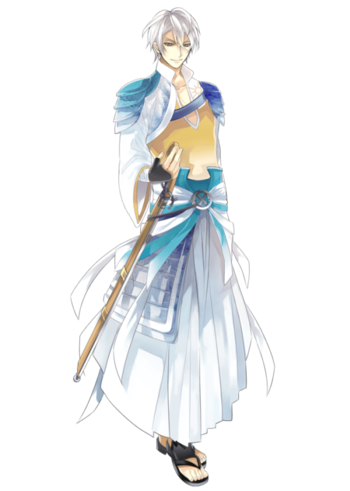 "Have you heard of the mythical creatures called satori? They live deep in the mountains and can read people's minds. [...] Fear not, little one. We only eat those who mean us harm — or who reveal our identities..."
Voiced by: Shunsuke Takeuchi

Nobunaga's left-hand man who, unlike the Mitsuhide from the main character's original timeline, was not the person who attempted to kill Nobunaga at Honno-ji. Despite that, he still is an extremely shady figure who delights in causing mischief for the other warlords and main character and seems to attract unsavory rumors and trouble wherever he goes.

Tropes common to the warlords living in Kasugayama Castle 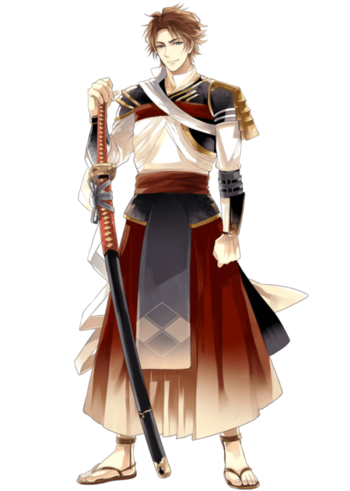 "You've stolen my heart. But don't worry, I won't charge you with theft. It clearly wanted to be with you. Do with it as you like."
Voiced by: Yuichiro Umehara

A charismatic and smooth-talking warlord who has teamed up with Kenshin Uesugi to kill Nobunaga, the recipient of their mutual hatred. Outside of trying to kill Nobunaga, though, he's a laid-back fellow who loves flirting with every woman who crosses his path, the main character not excluded. 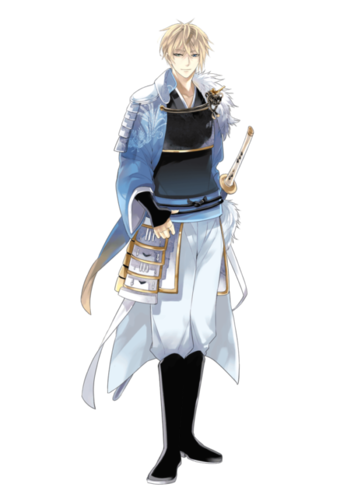 "I don't fear death. It's only when I'm slipping between the borders of life and death that I feel alive."
Voiced by: Hiroaki Miura

The more ruthless and unstable side of the Takeda-Uesugi alliance, he craves a good, bloody fight and unlike Shingen, is not a particularly lady-loving or happy-go-lucky guy outside of battle. In spite of his icy demeanor, however, he may be burdened with more past regrets and intense emotions than he wants to let on. 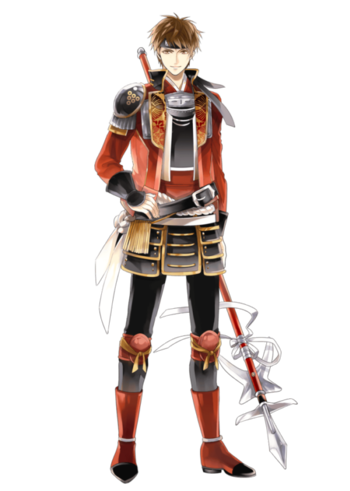 "I hate war, too. But if the only way to protect something important is to fight, then I will take up arms even though I despise it."
Voiced by: Kensho Ono

A vassal of Shingen who also hates Nobunaga and wants him dead for personal reasons. He has a personality that comes across as brash and rude at first but conceals a warmer side. 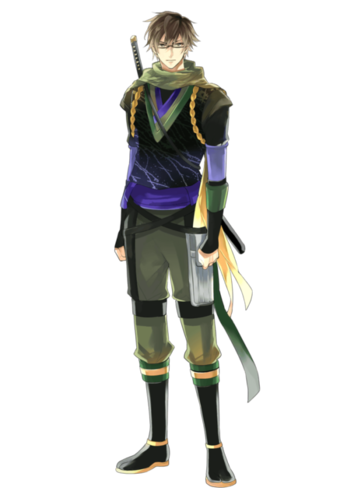 "Don't worry. Despite my appearance, I'm a ninja of moderate awesomeness."
Voiced by: Kenji Akabane

An astrophysics student and the main character's fellow time-traveler who got transported through the same wormhole as her, but got sent back four years earlier than she did. He became Kenshin's ninja assistant and minder after saving his life but still acts as a good friend to the main character, frequently checking in on her at Azuchi Castle and continuing his research on the wormhole to ensure that they know how to return to the present when the time comes. 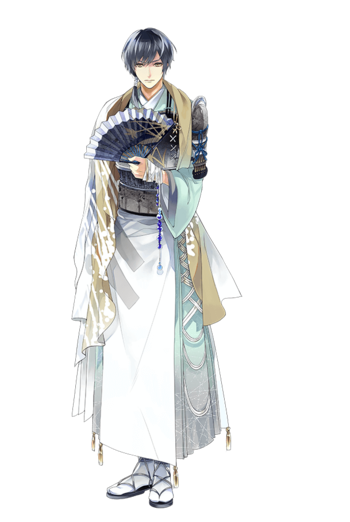 A character who first appeared in Ikémen Sengoku's PS Vita import before immigrating to the mobile game. Yoshimoto is a distant relative of Shingen who, like him, can charm the ladies without even trying and is in hiding in Kasugayama after his clan was decimated by Nobunaga and his forces. Unlike Shingen, though, he loves the arts and isn't as keen on violent conflict as the other warlords are. 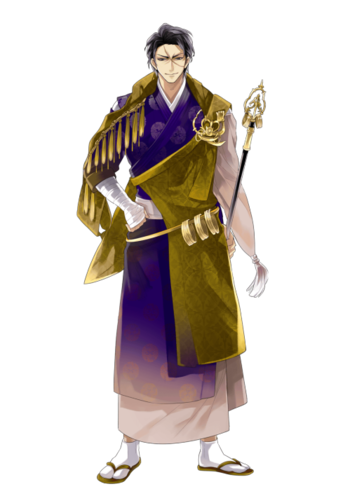 A scarred monk who harbors an even deeper and more bitter grudge against Nobunaga than Shingen and Kenshin do and is willing to manipulate the other characters and go to viciously extreme lengths to make the Devil King of the Sixth Heaven suffer for his killing of his fellow monk men. 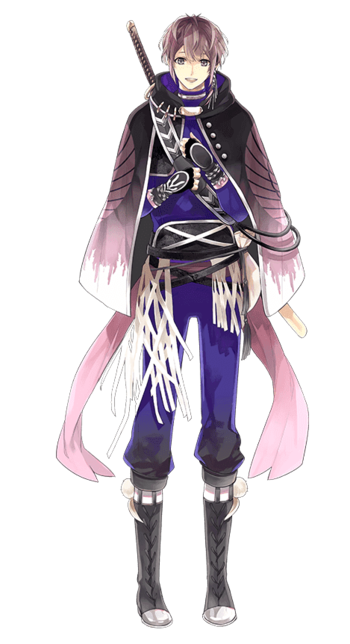 A character who first appeared in Ikémen Sengoku's PS Vita import before immigrating to the mobile game. Ranmaru is a cute, innocent-looking man who works as Nobunaga's page... and also as Kennyo's co-conspirator who tried to assassinate Nobunaga at Honno-ji. 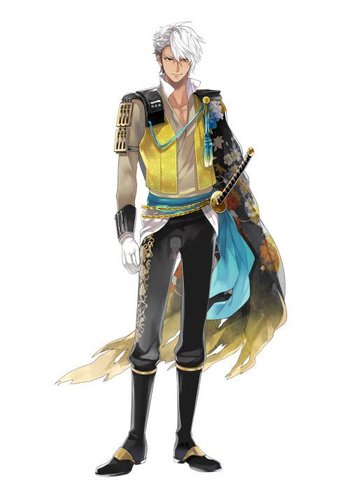 A character who first appeared in Ikémen Sengoku's stage play adaptation before immigrating to the mobile game. Motonari is a pirate who's not a part of either the Oda or Takeda-Uesugi forces but has his own dark goal of sowing death and chaos amongst the populace of Japan for as-yet-unexplained reasons.