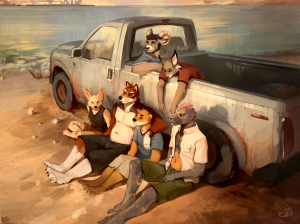 The Echo crew. Starting at the top left and going clockwise: Carl, TJ, Flynn, Chase, Leo, and Jenna.
"I knew you'd be back... [...] Even though you're here you're going to try and run again... Just stop... Because just like this town... You're only moving in circles..."
—Excerpt from the novel's opening lines.
Advertisement:

group. The story follows Chase, a river otter and a journalism student, on a reunion with his friends in the down-on-its-luck southwestern desert town Echo (based off the real life town of Echo, Utah). He is there to document the town's turbulent history for his college project over the spring break of 2015. At first, the otter is all too happy to reconnect with his old friends, but soon tensions rise as an incident from the past resurfaces and threatens to tear the group apart for good. Chase also comes to realize that Echo may not be all it seems, as unsettling phenomena reveal a more sinister side to the small town he's called home for most of his life.

Following the prologue, Chase can spend the remainder of his week with one of five childhood friends:

The resulting plot events and relevant side characters will vary widely depending on which of the friends you choose, with the only real constant being that things will inevitably reach a breaking point.

for updates on Echo and other projects, as well as download the novel for free on itch.io.

. A short prequel titled Echo: Route 65, which follows Chase & the main cast during a Day of the Dead party in 2008, is also available for download here

. In addition, several short stories from the perspectives of the six members of the main cast were written for Patreon members, with one of them (titled Benefits) later being distributed for free on itch.io as well

The visual novel finally reached completion in April of 2021, with both a prequel and sequel for the story currently in development as full-length visual novels of their own; the prequel, titled The Smoke Room, (itch.io page here

) follows the events of the initial hysteria incident in 1915note The prequel's original Working Title. that inspired Chase's project to begin with, while the sequel Arches follows a pair of entirely new characters visiting Echo 5 years after the events of the game. See also Adastra (2018), a full-length visual novel by the same creators that shares its name with a Show Within a Show (which In-Universe is closer to a Star Trek pastiche than a political thriller about falling in love with a wolf man).

This visual novel contains violence, sex, and disturbing imagery that is unsuitable for readers under 18.note Note that the majority of the routes avoid having explicit sexual scenes with Flynn’s being the exception. Otherwise, Echo depicts themes of mental illness, bullying, substance abuse, and abuse. As an additional warning, all of Echo Project's material will be of an adult nature and readers must be 18 or older. Therefore, all novels and external links posted here are potentially NSFW so please proceed with caution if you prefer not to see explicit content.