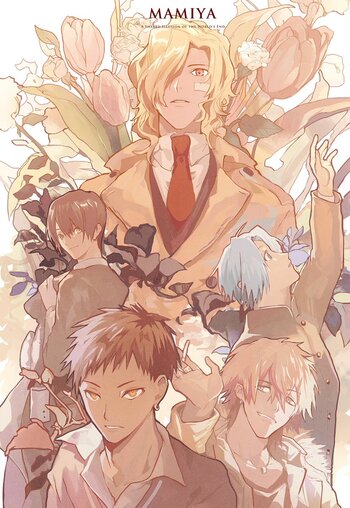 "Tokyo, during the year in which the world was prophesied to end..."
Advertisement:

Natsume Souichirou's funeral is attended by four of his friends, who all think to themselves that Natsume's death will have little consequence on the rest of the world. But soon after the funeral, a mysterious being named Mamiya starts appearing in their lives...

MAMIYA - A Shared Illusion of the World's End - is a captivating, dark visual novel in which a group of young men struggle against existential dread before the end of the world. Written, illustrated, and programmed by the one-man team Kenkou Land, MAMIYA is split into two parts: FallDown and DownFall. FallDown serves as an introduction to Natsume's four friends, while DownFall introduces a new protagonist and group of characters and expands on the universe. A sequel, DoomsdayDreams, is currently in production.

MAMIYA is a psychological horror story and contains a number of dark and depressing topics, including child abuse, violence, bullying, illness, self-harm, and suicide. Grief, gender identity, and sexual themes are also explored. The game is available on Steam

, with Fruitbat Factory providing the English localization. For those wanting to dip their toes into the story before buying the full game, FallDown is also available as a free demo.

Warning: This game has a number of twists that are difficult to talk about without spoiling, so it is recommended to play the entire game before proceeding.

Mamiya awaits in the Trichiliocosm.