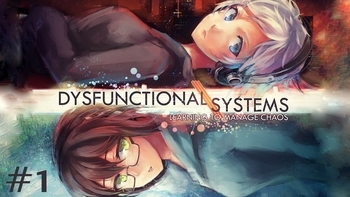 was launched on June 12, 2013. On February 22, 2014, a successful Kickstarter was created to help fund the next two episodes

The main viewpoint protagonist so far is Winter Harrison, a young girl raised in a utopian near-future society who is training to become a "mediator". Mediators in Winter's world are agents tasked with maintaining order in societies on other "planes" (parallel universes). The first episode follows Winter on her second outing, shadowing hard-bitten mediator Cyrus Addington.

On January 2, 2015, Dischan Media announced that they were halting full-time development of Dysfunctional Systems and offering partial refunds to anyone who pledged over $5 to the Kickstarter. The team's leader, Jeremy, was criticized for his refusal to release any part of the remaining games in the series, despite the prologue, Episode 0, being nearly complete. Episode 1 was later released for free.

In 2017, Dischan Media announced that they were reviving the series; Episode 0, now titled "Dyfunctional Systems: Orientation", was released on Steam on July 24, 2017. Episode 2 is now under development, with original artist Doomfest returning to the project.