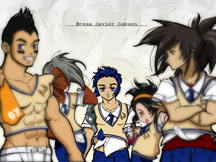 A Ren'Py yaoi visual novel game about an elite art school and searching for a mysterious soul mate.