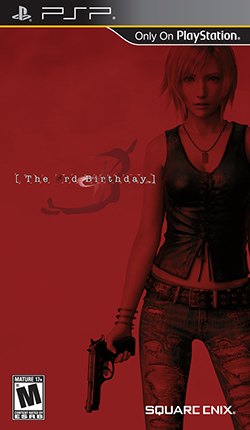 The 3rd Birthday is the third game in the Parasite Eve series.

It was originally announced for Japanese cellphones but was changed to a PSP game; it got a December 2010 release in Japan and a March 2011 release everywhere else. Speculation is that the game is not billed as "Parasite Eve" because Square Enix doesn't want to pay to keep using the license — fair enough, since due to the radical gameplay departure between this and previous titles, it'd really matter just for the name.

Christmas Eve 2012 sees the rise of massive tentacled structures known as the Babels throughout Manhattan and other parts of the globe, spawning time-distorting monsters known as the Twisted. Fast-forward one year later, to the U.S. government's Counter-Twisted Initiative launching their campaign against the creatures using Aya Brea and her Overdive ability to insert her consciousness into key SWAT troopers and National Guardsmen in the past and make key strikes against both the Twisted and the Babels. But why does Aya have no recollection of her past, and what is the meaning behind her dreams of a bloodstained wedding?

For added star power, Yvonne Strahovski and Jensen Ackles provided the voices for Aya Brea and Kyle Madigan respectively for the English version.