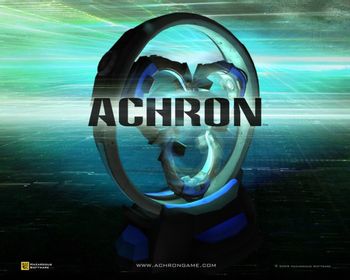 "Paradox resolution in my favor. All right. Take that causality!"
—Shadowfury333
Advertisement:

Achron refers to itself as the first "Meta Time Strategy Game," i.e. it uses Time Travel as a functional game mechanic. It's possible to issue commands to units in the recent past or near future, and even send them to different times.

A trailer can be seen here.

Information on the game and ordering can be found at achrongame.com

and also on Steam.

There is also a helpful wiki.

Additionally, there is a small demo version of the game.

Not to be confused with Archon.