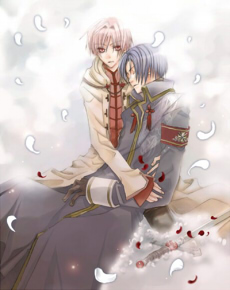 Snowmageddon.
Hana Ki Sou (花帰葬), sometimes translated as "Flower Funeral", is a doujin PC Boys Love Game released by Haccaworks in 2003. A voiced Playstation 2 port with new content was released in 2006; a PSP port followed in 2010. There is also a two-volume manga adaptation.
Advertisement:

Kuroto was born to destroy the world; and so Hanashiro was born to save it. The only way Hanashiro can do that is by killing Kuroto. However, they one day meet and become very close, and Hanashiro becomes completely unwilling to fulfill his duty as the Savior. With conflict rising among the nations, the fate of the world has become unclear...

Note that the mere presence of some tropes on this page can reveal some spoilers.