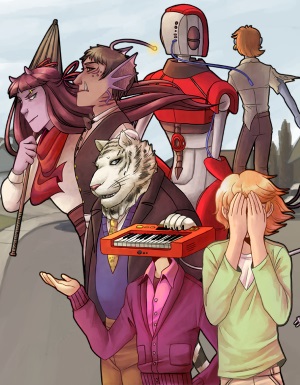 For centuries, humans and duenkhy (non-humans) have lived together on earth. However, relationships were strained, and most believed that the two groups were better off separated. Jun felt the same until their childhood, when a Duenkhy showed them kindness.

In recent years, however, they have come to feel totally out of place living among humans. Having come to believe they no longer fit in their own community anymore, they decide to run away and shack up with a friend of theirs, living among the duenkhy and pretending to be one of them. There, they meets a number of strange but interesting Cute Monster Guys:

Can Jun find their own place here among the duenkhy, and find someone else who will be able to accept them as a human?

The Duenkhy is an amateur original English Otome Game developed by Alyssa Leandra Dalangin. It is set for full release in late 2014, and a demo has already been released. The official website is here.

The Duenkhy contains examples of: