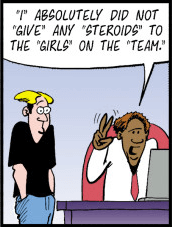 "[The quote marks] surround words that can be legally disputed."
"I 'believe' you, too. See the quotations I'm making with my claw hands? It means I DON'T believe you!"
— Bad Cop, The LEGO Movie
Advertisement:

Air Quotes are the act of making it visually apparent that a certain word was put inside quotation marks during one's speech. One can accomplish this by raising their hands and flexing and unflexing their index and middle fingers while leaving the others folded. "Quote, whatever they said, unquote" can also be heard. It's almost always used in a sarcastic context.

Since the gesture imitates a certain written mark, it can create a bit of a Fridge Logic if the character doing it comes from a culture that doesn't use this mark in their writing.

Mayor Whitebottom and Paige are not good at using air quotes as Molly points out.

Mayor Whitebottom and Paige are not good at using air quotes as Molly points out.