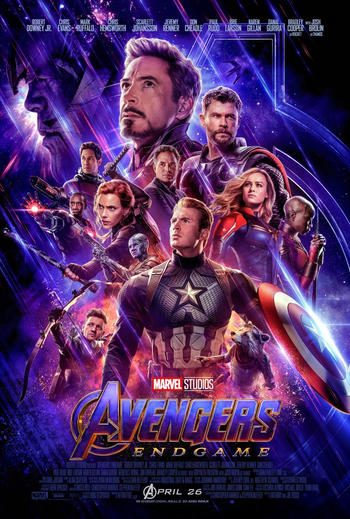 Avenge the fallen.note Clockwise from the bottom left: Ronin, Nebula, Black Widow, War Machine, Ant-Man, Iron Man, The Hulk, Thor, Captain Marvel, Okoye, Rocket Raccoon, and Captain America. In the background: Thanos. A story 11 years in the making reaches its endgame.
"This is the fight of our lives. And we're gonna win. Whatever it takes."
— Captain America
Advertisement:

Avengers: Endgame is a 2019 superhero film and the twenty-second film entry of the Marvel Cinematic Universe. It is directed by Joe & Anthony Russo, and written by Christopher Markus & Stephen McFeely — the creative team behind the second and third Captain America films. This team also worked on the previous film in the series, Avengers: Infinity War, which directly set up the events of this one. It is the tenth, and penultimate, film in Phase 3 of the setting, and the end of the Thanos Myth Arc that began with the first Avengers film.

After the cataclysmic events of Thanos's victory, half of the universe's sentient life is gone, and the completed Infinity Gauntlet has disappeared with the Mad Titan to a faraway world. The surviving heroes from The Avengers and the Guardians of the Galaxy, meanwhile, are left to pick up the pieces of a shattered universe. However, following the arrival of a few new allies, Earth's mightiest heroes discover a means that may allow them to undo Thanos's genocide, and bring back the friends and family lost. And so, along with said allies, the original six Avengers embark on one last mission together to set the world right, whatever it takes.

While this movie is not intended to be the final Avengers movie ever, the three-hour-long film serves as the culmination of everything that has happened in the MCU thus far since it began with Iron Man all the way back in 2008, and the last with the original six Avengers serving as the focus. The movie is followed by Spider-Man: Far From Home, which serves as an epilogue to the "Infinity Saga", exploring the fallout of Infinity War and Endgame. The first three series of Phase 4 all directly pick up from the events of Endgame.

The film was released in theaters on April 26th, 2019, and was re-released on June 28th with an introduction and post-credits featurette introduced by co-director Anthony Russo. The featurette included a tribute to the late Stan Lee, a deleted scene featuring The Hulk, and the opening scene from Spider-Man: Far From Home.

♫ Never thought that you would be
Standing here so close to me
There's so much I feel that I should say
But words can wait until some other day.
Kiss me once, then kiss me twice, then kiss me once again,
It's been a long, long time... ♫
Feedback

Which Avenger Will Sacrifice?

Natasha and Clint fight it out for the honors of sacrificing themselves.

Example of:
More Hero Than Thou

Which Avenger Will Sacrifice?

Natasha and Clint fight it out for the honors of sacrificing themselves.