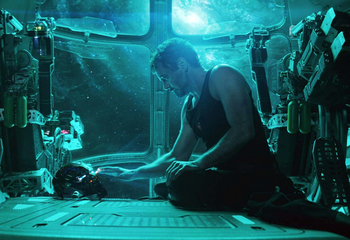 "I know I said no more surprises, but I gotta say, I was really hoping to pull off one last one. But it looks like... well, you know what it looks like."
"If you find this recording, don't post it on social media; it's gonna be a real tearjerker."
— Tony Stark, with a bit of an understatement.

Avengers: Infinity War spared no expense in wringing as many tears out of its audience as it possibly could. Endgame doesn't skimp on the tearjerkers, either; in fact, for all of its triumphs, it's much more tragic than its predecessor, as it is the End of an Age within the MCU after 11 years.