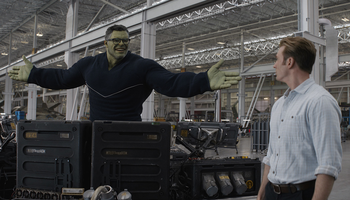 "Time travel!" note "...What? I see this as an absolute win!"
Tony Stark: Why the long face? Let me guess, [Scott Lang] turned into a baby.
Steve Rogers: Among other things, yeah.
— Discussion on the Avengers' first foray into Time Travel
Advertisement:

Avengers: Endgame may be one of the (if not the) most tearjerking entries in the MCU, but that doesn't mean that we have to miss out on the usual humor that we've become accustomed to over the years.

Take the stairs, hate the stairs...
...SO MANY STAIRS!
NOOO! STAAAIRS!