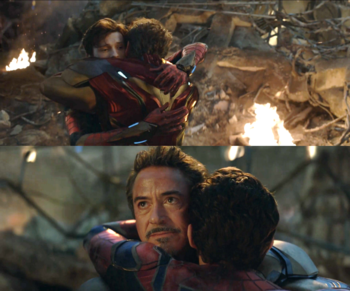 "Oh... This is nice."
Tony Stark: Love you tons.
Morgan Stark: I love you 3000.
— Tony sending Morgan to bed with some parting words.
Advertisement:

Avengers: Endgame is a simple, sweet story of how the remnants of Earth's Mightiest Heroes and the "bunch of a-holes" didn't let catastrophic losses bring them down from the point of no return, but instead united as one to bring back and avenge the fallen.

Proof that Tony Stark has a heart.