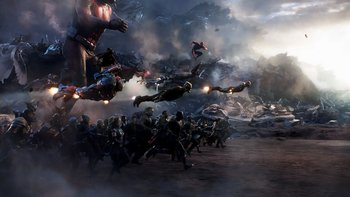 Scratch that, THIS is the moment we've all been waiting for.
"AVENGERS! ... assemble."
— Captain America, signaling the heroes to charge Thanos' forces, and saying the two words fans have waited for eleven years to hear.
Advertisement:

Succeeding the already-phenomenal Infinity War and serving as the Grand Finale of the Marvel Cinematic Universe's first Myth Arc, with every surviving hero once again reuniting to undo Thanos' universal genocide and restore all life to how it once was, we have Avengers: Endgame. And it clearly shows that Marvel Studios is dialing everything up this time around: culminating in the single greatest final battle in comic book movie history.

It's the culmination of eleven years, 22 films, billions and billions of dollars in box office money, and the most tremendous All-Star Cast of its decade—and quite possibly in any decade, for that matter. It would even go on to dethrone Avatar and become the highest-grossing movie of all time for a while,note Without adjusting for inflation. and still has the highest-grossing initial release of any film ever. Endgame proves to be the perfect capstone atop a crowning universe of awesome.

open/close all folders
The Rescue of Tony Stark and Nebula
The Ambush on Thanos
Five Years Later
Advertisement:
The Time Heist: New York
The Time Heist: Asgard
The Time Heist: Space
The Time Heist: Camp Lehigh
The Attack on the New Avengers Facility
The Battle of Earth
The entire goddamn final battle. As easy as it is to just leave it at that, it would not only result in a Zero-Context Example, but it would honestly undersell just how incredible this entire sequence is without going into complete detail. Listening to this

while reading the below is highly recommended.
The End
And I... am... Iron Man.