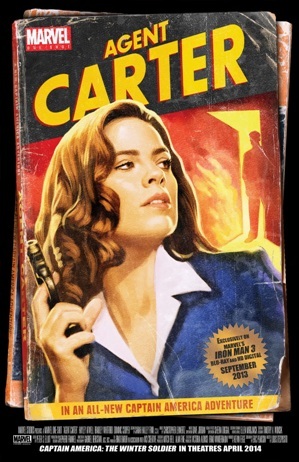 Agent Carter, also known as Marvel One-Shot: Agent Carter, is a 2013 Short Film and the fourth of Marvel One-Shots, set in Marvel Cinematic Universe. It's included on the Iron Man 3 Blu-ray, and was used as a proof-of-concept for Agent Carter, a weekly TV series that debuted on ABC in 2015. This short film takes place after the TV series' Season 2. Disney+ posted it online first as an extra for Iron Man 3, then later on its own page.

A year after Steve Rogers' disappearance, Peggy Carter works a menial job at the New York office for the Strategic Scientific Reserve (S.S.R.). But after yet another day of being put down by her coworkers and sexist boss John Flynn, Peggy receives word of an urgent mission to close in on a mysterious target named "Zodiac". Putting herself back into the field, Peggy dusts off her old skills, beats up bad guys, and alerts the ear of her old friend Howard Stark, who invites her to help him run a new organization called S.H.I.E.L.D.

Hayley Atwell reprises her role as Peggy. Supporting cast includes Bradley Whitford as Agent Flynn, Dominic Cooper reprising his role as Howard Stark, and Neal McDonough also returning as Dum-Dum Dugan in The Stinger. The short film is directed by Louis D'Esposito, with a screenplay by Eric Pearson.