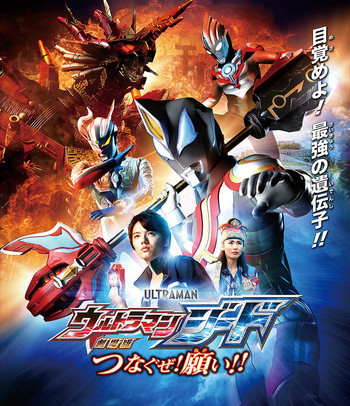 Ultraman Geed The Movie: Connect The Wishes! is a 2018 tokatsu film produced by Tsuburaya, the Big Damn Movie for Ultraman Geed set after the series have ended.

Gillvalis, the Giant Artificial Brain which is a destroyer of planets, assumed to be destroyed by the Ultra Brothers, has reawakened itself, and is resuming its mission to eliminate all life in the universe. Now targeting Planet Earth, the powerful mechanical villain is sending its army of monsters, the Galactron, to Okinawa, where a mysterious shrine holds an ancient weapon which is Gillvalis' only weakness.

Riku and the AIB, after the events of Ultraman Geed, ends up meeting Jugglus Juggler, formerly the villain of Ultraman Orb, who informed them of the impending threat. They immediately set off to Okinawa, where an encounter with Airu Higa, the lone survivor of Planet Kushan, wiped out by Gillvalis several millennia ago, will help Riku and Ultraman Geed defeat his most terrifying opponent yet.

Ultraman Geed The Movie: Connect The Wishes! provides examples of the following tropes: